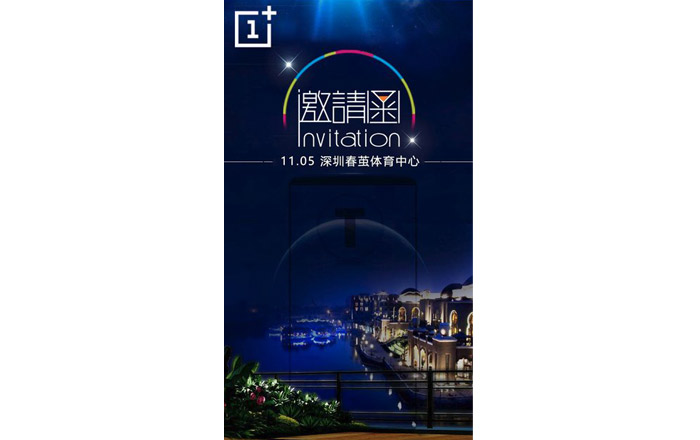 Update: OnePlus has confirmed to GSMArena that the invite is fake.

After weeks of speculation about the OnePlus 5T, OnePlus has officially announced that it is hosting an event on November 5 in China. It’s begun sending out invites for the occasion, offering a couple of clues along the way.

First of all, the poster features the letter T inside the outline of a smartphone. It’s not just any handset either, but a phone with distinctively thin bezels along the sides. The top has a slightly thicker border, presumably to house the selfie camera and other assorted sensors.

All-in-all, it’s pretty safe to say we’ll be seeing a bezel-free OnePlus 5T at the event. Moreover, the OnePlus 5 has been going out of stock in various countries across the world except for India. This typically indicates that the company is getting ready to announce a new product.

Most rumors about the OnePlus 5T claim that it’ll feature a large 6-inch 1080 x 2160p screen with minimal borders and an 18:9 aspect ratio. This is probably going to be the biggest external change. Not much is expected to change internally.

Qualcomm hasn’t released an update to the Snapdragon 835 processor this year, so the same SoC will likely take up residence in the OnePlus 5T. The fate of the fingerprint scanner is unclear as of now. It’ll likely move to the back unless the company has somehow managed to come up with a reliable under-display solution.

Another mystery concerning the OnePlus 5T is its price. The OnePlus 5 is already pretty expensive and its successor may become even more expensive due to an extensive face lift. We’ll fill you in on the upcoming device as more details emerge in the next few weeks.