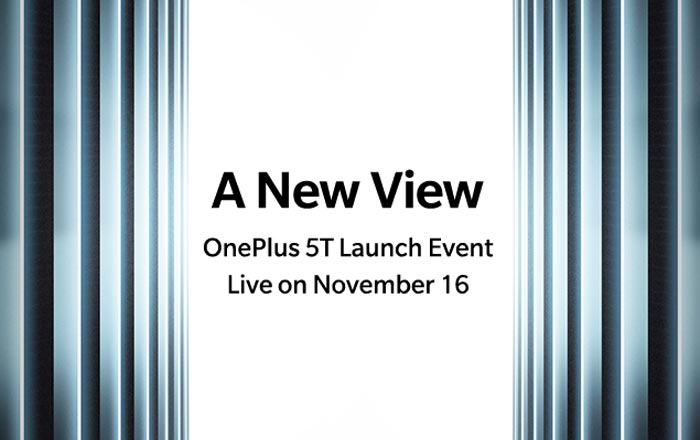 The cat’s finally out of the bag as OnePlus has officially announced just when the OnePlus 5T will be making its debut. As expected, there’s a launch event taking place in Brooklyn, New York, on November 16 at 11 am ET/4 pm GMT/9:30 pm IST.

Dubbed “A New View,” the occasion is being streamed live all around the world. People can buy tickets for the New York event at $40 starting from November 8. OnePlus is also selling tickets in India on the same day, but fans in the country will have to settle for watching it on a giant theatre screen rather than in person.

OnePlus has partnered with PVR in 5 cities namely Hyderabad, Mumbai, New Delhi, Bengaluru, and Pune to broadcast the proceedings. Paying Rs 99 will grant individuals a seat, free popcorn, free coke, and a free OnePlus 2018 calendar. Unfortunately, the brand’s not planning to put the handset up for sale there, but there will be a demo device to play around with.

Sales for the OnePlus 5T are set to kickoff from November 21 in North America and Europe. China will then get it on December 1. The company’s planning to host a flash sale in India on November 21 and then properly vend it starting from November 28.

As for price, OnePlus CEO Pete Lau recently told a fan on Weibo that CNY 4000 (roughly $600 or Rs 39000) would be enough to purchase the OnePlus 5T. This isn’t too far off from the 8GB version of the OnePlus 5 which goes for $539 or Rs 37999. Still, things are getting pretty expensive in OnePlus land so steel yourself to pay more than ever before.

You can buy tickets for the November 16 launch event here. There’s already an Amazon India page for the smartphone, so it’ll likely be sold via the e-commerce site as before.