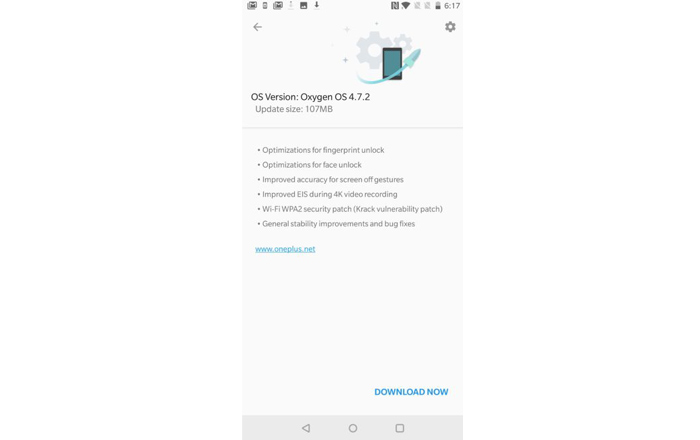 The OnePlus 5T just got launched across the world and the company has already decided to roll out a software update for it. The upgrade mostly addresses a few issues and fixes a few vulnerabilities.

Oxygen OS 4.7.2 weighs in at 107MB and should be arriving soon for all OnePlus 5T units. It offers optimizations for fingerprint and the all-new face unlock. You’ll notice better accuracy for screen off gestures, as well as improved EIS while shooting 4K video.

On the security side of things, OnePlus has bundled the Wi-Fi WPA2 security patch, better known as the KRACK vulnerability patch. The OnePlus 5 beamed out the fix for the OnePlus 5 earlier in November, so both variants are safe from the exploit. The brand’s added a couple of general stability improvements and bug fixes as well.

Also See: OnePlus 5 set to be discontinued once stock runs out

If you were hoping to get a taste of Oreo, you’ll be sorely disappointed since the OnePlus 5T isn’t due to get it until early 2018. The firm has promised to begin seeding out the beta version of the software later this month though, so you can get an early preview of it if you’re willing to take the risk.