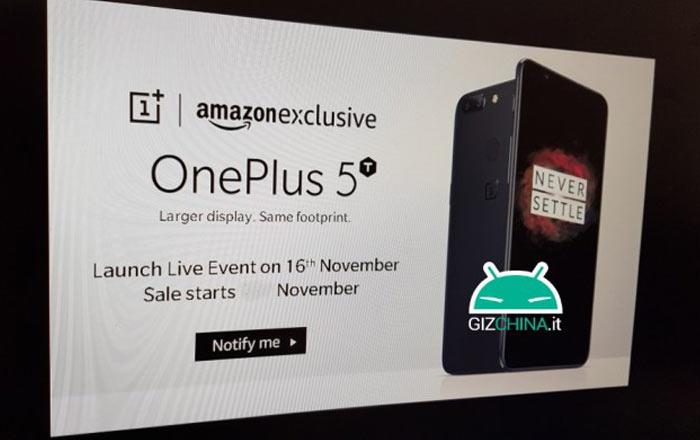 Last we heard, the OnePlus 5T was set to get released sometime after November 20 across the world. A new report now claims that the specific date for its arrival is November 16.

GizChina has provided evidence for this in the form of what looks like a presentation or screenshot. An anonymous source supplied the photo to the publication, so its authenticity can’t be taken for granted. As per the image, the phone is indeed called the OnePlus 5T and it will bear the tagline ‘Larger display. Same footprint.’

This tagline has been spotted before, so it’s probably the one OnePlus will be going with to promote the handset. It’s simple enough, conveying that the device measures the same in spite of having a bigger display. That’s the key advantage of 2017’s minimal bezel trend, though we’ll have to wait and see what the company does to differentiate itself from its numerous rivals.

Also Read: OnePlus 5T pops up in the wild

The other big revelation is the November 16 date. It seems OnePlus is hosting a live launch event on that day. The ‘Amazon Exclusive’ logo can be seen above, hinting that the image is from India since the e-commerce site has long been a partner to the Chinese firm in the country.

Strangely enough, the sale date has been edited out for unknown reasons. It’s possible the OnePlus 5T will go up for grabs on November 20 following the earlier leak’s timeline. The brand’s co-founder Carl Pei has already begun teasing the device with subtle hints and camera samples, so an official announcement shouldn’t be too far off.