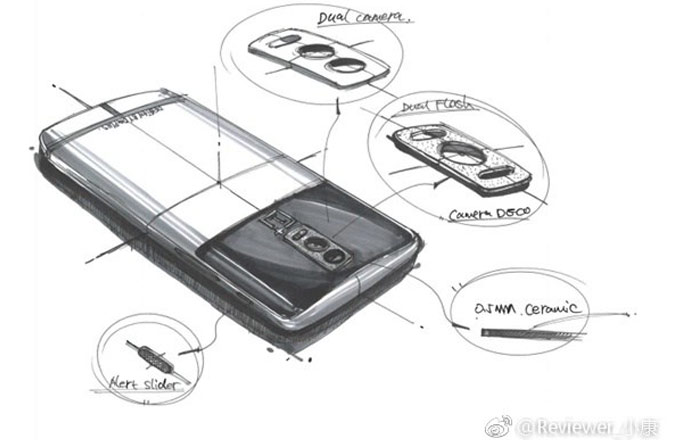 The OnePlus 5 has become the subject of 2 reports hinting at intriguing new details about the smartphone in the run-up to its expected June arrival. The most exciting of the 2 is a new Weibo leak which brings a couple of sketches to the fore.

If accurate, the drawings indicate that OnePlus is planning to place dual cameras not just on the back but on the front as well. The former has been rumored before, but the latter seems to be a new development. It’ll be interesting to see what the brand does with twin selfie shooters, so far seen in phones like the Oppo F3.

The OnePlus may also be looking to the Google Pixel for design inspiration since the upper half of its back is occupied by a ceramic plate 0.5mm thick. This is a big departure from the smooth metal surfaces the firm usually favors for its flagships. The mid-range OnePlus X was the last device to have the material, so there is precedence for its use.

Also Read: OnePlus 5 gets confirmed, coming out this summer

A USB Type-C port can be seen at the bottom alongside a 3.5mm headphone jack and speaker grilles. OnePlus’ ever-present physical notification slider occupies the left side next to the volume rockers. Overall, the phone appears to have a curved back with a thick portion in the middle that tapers out smoothly to the sides.

The other big news is that OnePlus has officially released the second teaser for its upcoming smartphone. The poster simply says ‘Hello 5’ and the accompanying post’s text reads ‘Hey Summer! Give me five!’ Put the two together, and it’s easy to assume the brand is hinting that its 5-monikered flagship will be coming out this summer.

Finally, the 128GB OnePlus 3T has officially been discontinued. That’s what it says on the brand’s site, plus it’s nowhere to be found on Amazon India. Both platforms are only selling the 64GB option as of now.

As for the reason for the 128GB OnePlus 3T’s demise, a customer care representative told a Reddit user that OnePlus is a small company that needs to focus on one flagship device, presumably the OnePlus 5. The Redditor also pointed out that Samsung has taken the 128GB UFS 2.0 storage out of production, another likely cause.

UPDATE: OnePlus representatives have issued two statements denying that the 128GB OnePlus 3T has been killed permanently. It told GSMArena that the model has gone out of stock and will come back in the next wave of inventory.