OnePlus 5 officially coming out on June 20

The OnePlus 5 is officially making its international debut on June 20 and India debut on June 22. The events will be live streamed via the brand’s website at 12 pm EDT and 2 pm IST, respectively.

The news comes as a breath of fresh air amid a flood of new leaks about the OnePlus 5. The latest one has arrived courtesy Android Police. The publication has gotten hold of what appears to be an authentic render of the device (see above) showcasing its front and back.

The photo falls in line with earlier leaks which have hinted at an iPhone 7 Plus-like design. The similarities between the two are pretty striking, with the alleged OnePlus 5 featuring dual cameras sitting besides an LED flash module in a horizontal orientation.

One thing which may help the OnePlus 5 distinguish itself from Apple’s handset is the tech behind the shooters. The former is probably going to sport a color + monochrome lens setup to deliver clearer and more detailed shots. 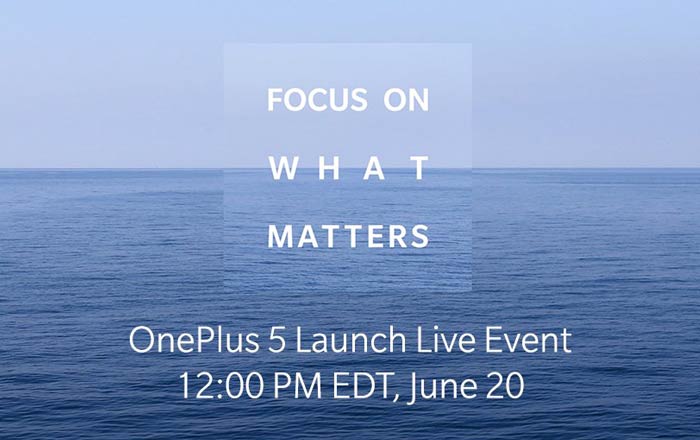 OnePlus’ promotional image for its flagship handset offers further clues with regards to the phone’s photography skills, sporting the phrase ‘Focus on what matters.’ Based on the sentence, the smartphone will probably come with bokeh abilities which will allow owners to blur out the background and focus on a specific person or object.

OnePlus India is currently running a contest at the end of which it’ll give away OnePlus 5 units for free. To participate, individuals will have to sign up for an SMS alert to watch the handset’s unveiling live. 5 winners will be declared via Facebook on June 30.