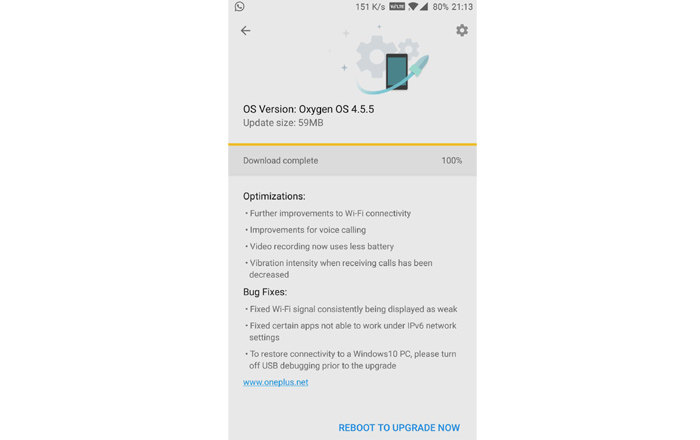 OnePlus has begun sending out OxygenOS 4.5.5 for the OnePlus 5, just over a week after version 4.5.3 started rolling out. The news was highlighted by a user on OnePlus’ forums complete with a screenshot and download links.

OxygenOS 4.5.5 weighs in at 59MB and still carries the same May 2017 Android security update as before. It features a mix of optimization and bug fixes. The former category includes further improvements to Wi-Fi connectivity. To recall, the issue was fixed in OxygenOS 4.5.3, so perhaps there were a few problems that were left to sort out.

There are also improvements being made to voice calling. Moreover, OnePlus has reduced the vibration intensity which occurs when a person is receiving a call. For those concerned about their battery draining out while shooting videos, the company has come up with a solution which is supposed to ensure that the activity draws less power.

As for fixes, the OnePlus 5 will no longer consistently display the Wi-Fi signal as being weak. Apps which weren’t able to work under IPv6 network settings can freely do so now. Finally, the brand is asking users to turn off USB debugging before going through the upgrade process in order to restore connectivity to a Windows 10 PC.

If you’re wondering where exactly OxygenOS 4.5.4 went, the update was actually sent out to OnePlus 5 owners in the Netherlands who were facing 4G connectivity issues. For now, version 4.5.5 seems to rolling out to a small number of users. If you’re feeling impatient, you can download the full ROM here and 4.5.4 to 4.5.5 OTA link here.