OnePlus’ next flagship may not be called the OnePlus 4 after all going by a couple of rumors which assert that it’ll be dubbed the OnePlus 5 instead. There’s no reason given for this skipping. It might be because the number 4 is considered unlucky in China.

There’s also the fact that the presence of the OnePlus 3T makes OnePlus’ upcoming phone its fifth flagship offering. Perhaps the manufacturer wants to distinguish the OnePlus 5 from the ones that came before it, like Apple is supposedly doing with its tenth anniversary iPhone 8.

Speculation so far suggests that the OnePlus 5 will carry specs like a 5.5-inch QHD display and run on Android 7.0 Nougat. It might pack 4GB, 6GB or 8GB of RAM and 64GB, 128GB or 256GB of ROM. Users might be able to add up to 256GB of extra memory via a microSD card slot.

OnePlus could also bless the device with a top-of-the-line Snapdragon 835 processor and Adreno 540 GPU. Reports differ when it comes to the smartphone’s design and camera. YouTube channel Concept creator seems to think the phone will bear a chamfered style and sport dual 16MP and 12MP rear lenses with a dual-LED flash unit separating them.

On the other hand, Korea Portal claims that the OnePlus 5 will boast of a dual-edge curved design within an aluminum and glass or ceramic body. The look is apparently similar to the Galaxy S7. This could mean the smartphone will be competing with the Galaxy S8.

The publication also believes that the handset will have a 23MP primary snapper and stick to the same 8MP selfie shooter as the OnePlus 3. Other possible specs include a 4000mAh battery and USB Type-C support. 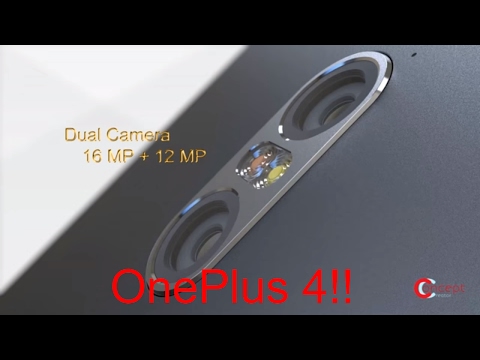