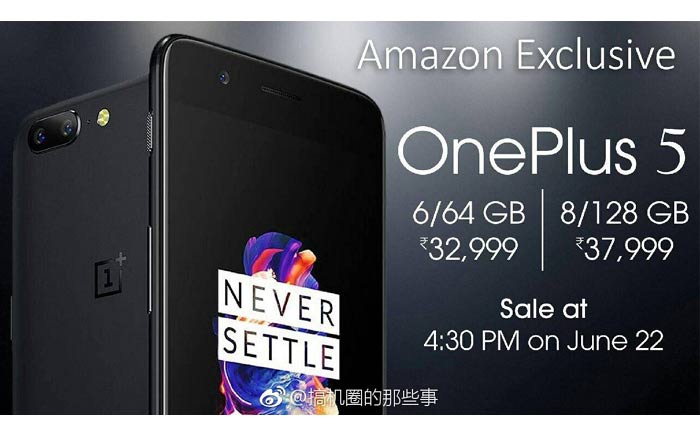 The OnePlus 5 has shown up in the rumor mills once again, this time with regards to its price tag in India. Its cost has been leaked on numerous occasions before and the new rate card falls in line with earlier assumptions.

As per a Weibo forum post, the OnePlus 5 will be sold in 2 variants. One could pack 6GB of RAM and 64GB of storage at Rs 32999, while the other may get stuffed with 8GB of RAM and 128GB of ROM at Rs 37999. If true, the figures would make the smartphone the brand’s most expensive flagship yet.

The leak further alleges that the OnePlus 5 will go up for sale at 4:30 pm on June 22 via Amazon India. This is certainly possible since the device is getting launched at 2 pm that day. However, given the unverified source of the information, all this should ideally be taken with a pinch of salt up until things go official on D-day.

Collectively taking into account the numerous teasers and leaks about the OnePlus 5, the handset is going to look strikingly similar to the iPhone 7 Plus and run on a Snapdragon 835 processor. It might feature dual 20MP + 16MP cameras on its back with the power of bokeh and a color + monochromatic combination behind it.

Other key specs may include a 3300mAh battery fortified with Dash Charge, a 5.5-inch full HD screen with a wider DCI-P3 color space, and support for Bluetooth 5.0 and LTE Cat 12. The OnePlus is set to be announced on June 20 internationally and June 22 in India.