OnePlus 5 gets confirmed, coming out this summer

OnePlus has lifted the veil of secrecy over the OnePlus 5, confirming that that is indeed the name of the device. Its verification comes shortly after two separate leaks about the phone surfaced online.

Starting off on the official side of things, OnePlus told The Verge that the OnePlus 5 is coming out this summer. Sadly, it didn’t provide a specific timeline for this. The company did mention that it’s opting for the number 5 instead of 4 because the latter is considered unlucky in China.

Technically, the OnePlus 5 would also be the fifth handset made by the company since its beginnings, but that apparently wasn’t a factor when determining the name. Unusually enough, the brand admitted that it was partly inspired by ex-NBA basketball player Robert Horry who wore a number 5 jersey.

Moving on to the speculative side of things, the OnePlus 5 recently showed up on Chinese retailer OppoMart’s website. The portal has uploaded an unofficial render of the smartphone as a placeholder alongside what appears to be unofficial specs.

These include 6GB of RAM, a 5.5-inch QHD screen, a Snapdragon 835 processor, 64GB/128GB of ROM, Android Nougat-based Oxygen OS, an 8MP selfie camera, and dual 12MP Sony-made rear shooters. The seller has also slapped a $449 price tag on the phone and a June availability date. 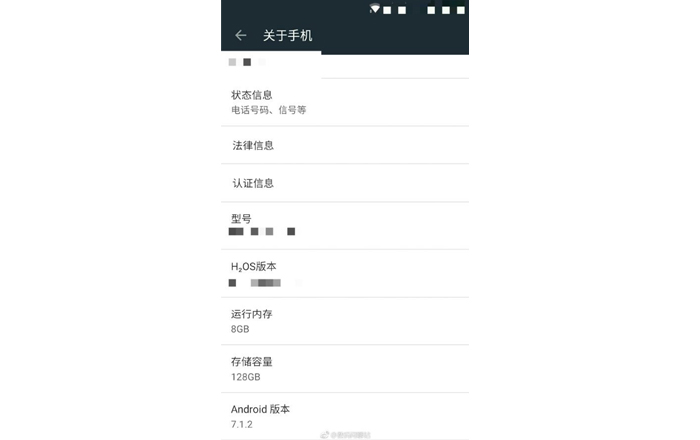 Finally, an alleged screenshot of the OnePlus 5’s About section has popped up on Weibo. Two details stand out, with one being that it runs on the China-only Hydrogen OS and the other that it features 8GB of RAM. Put the two together, and one would assume that the phone’s Chinese variant will offer a whole lot of RAM.