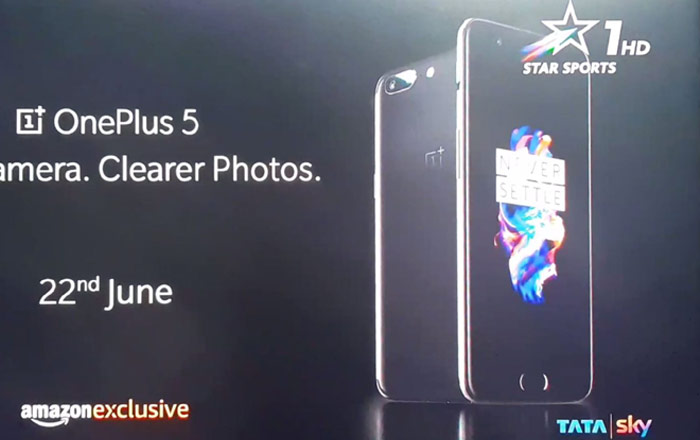 OnePlus has gone ahead and shown off the OnePlus 5 via a TV ad just days before its official launch. The spot aired on June 18 during the ICC Champions Trophy final between Indian and Pakistan, a guaranteed way to get some major eyeballs and build up hype.

The ad itself is pretty straightforward, with Bollywood actor Amitabh Bachchan opening a box and peeking inside at the OnePlus 5 while asking questions about its India launch date. The teaser then cuts to a shot of the handset depicting its front and back.

The render is identical to a leak which came out last week. There’s some heavy iPhone 7 Plus and Oppo R11 inspiration going on at the back. A pair of dual cameras can be clearly seen sitting flush against the surface, while a physical home button can be seen up front presumably doubling up as the OnePlus 5’s fingerprint scanner.

A separate rumor out of China provides some insight on the OnePlus offering’s battery. As per some leaked promotional material, the smartphone will sport a 3300mAh battery. That’s 100mAh lesser than its previous variant, a surprising downgrade. We’ll have to wait and see whether it makes any difference in terms of battery life.

One thing that hasn’t changed is the presence of Dash Charge. The Weibo leak also talks about delivering a day’s power in half an hour. OnePlus also touts that unlike other quick charge solutions, its own technology makes the device cooler.

The OnePlus is scheduled to come out on June 20. It’ll then proceed to hit India on June 22.