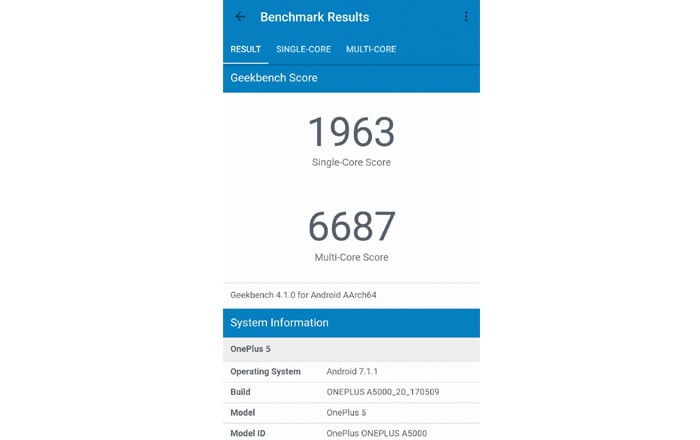 The OnePlus 5 is in the news again, this time for allegedly topping the GeekBench 4 list when it comes to multi-core performance. GSMArena says it received a screenshot of the phone’s scorecard from a credible source as proof of this feat.

While the OnePlus 5 isn’t out yet, many believe that it’ll be powered by Qualcomm’s Snapdragon 835 processor. This goes a long way in explaining the handset’s supposed 1963 single-core and 6687 multi-core scores on GeekBench. The image indicates that it’ll run on Android 7.1.1 Nougat and bear the model number A5000. Both fall in line with previous rumors.

If the results are accurate, the OnePlus 5 would beat out both the Galaxy S8 and Xperia XZ Premium. The Samsung and Sony phones run on the same Snapdragon 835 SoC, but appear to score a lower 6375 and 5824, respectively, in the multi-core test.

The OnePlus 5 gets pushed down to third place when looking at its single-core performance. That chart is topped by the iPhone 7 Plus at 3473 points, with the Galaxy S8 Plus a distant second at 1978. It should be noted that the OnePlus 5 being evaluated might be a pre-production unit, so the final model that consumers actually get their hands on might be slower or perhaps even faster.

Speculation so far has hinted that OnePlus’ next flagship offering will boast of dual cameras on the front and back, a 3600mAh battery enhanced with a 25% increase in charging speeds, and 8GB of RAM. The last is on shaky ground at the moment since some say the company will stick to 6GB of RAM at first and consider an 8GB/256GB variant later.