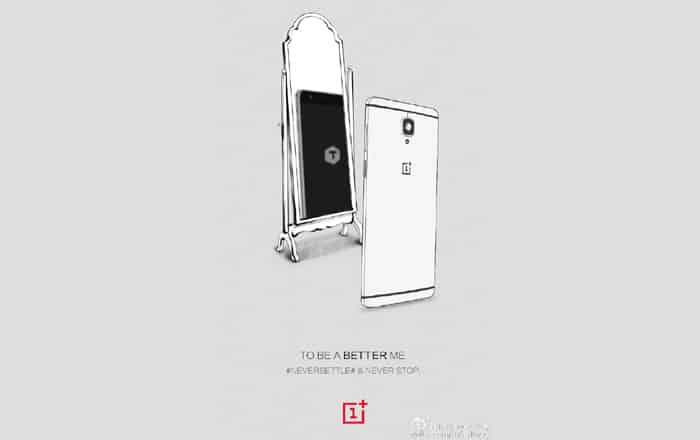 The OnePlus 3T has gotten leaked yet again just a day ahead of its launch on November 15. A promotional poster for the handset appears to have surfaced on Weibo confirming a few assumptions about the phone.

The freshly leaked image depicts what appears to be the OnePlus 3T standing in front of a mirror. While its back looks like the OnePlus 3, its reflection has the letter T on it within a hexagon. The caption below the picture states ‘To be a better me.’

The photo and caption combined serve to add further credence to the prevailing rumor that the OnePlus 3T looks just like its predecessor with scattered spec upgrades covering various aspects of the phone. One thing which is known for sure is that the company plans to enhance it with a faster Snapdragon 821 processor.

The new leak also verifies this claim, along with asserting that OnePlus is going to infuse the main camera with a superior Sony IMX398 sensor, just like the Oppo R9s. The report further claims it’ll be powered by a bigger 3300mAh battery.

In other OnePlus related rumors, the handset’s next flagship, possibly called the OnePlus 4 or 5, was spotted online recently with a few of its specs in tow. It might get blessed with a dual-camera system which could support AR and MR technology.

The OnePlus 3T is expected to be priced at $479, $80 more than the original version. Stay tuned for more on it the moment it goes official on November 15.