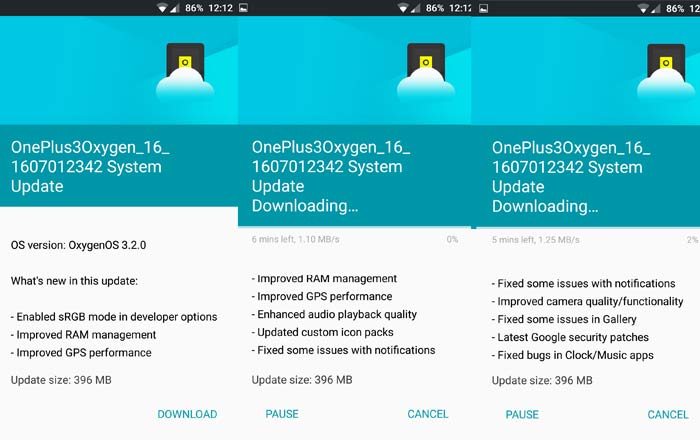 OnePlus has finally started rolling out its eagerly anticipated update for the OnePlus 3 which is supposed to resolve major issues which people had with the phone. The upgrade was first rolled out to review units in the form of the OxygenOS 3.1.4 OTA in June and is now making its way to the public as the OxygenOS 3.2 OTA.

To recap, a sizable number of reviewers and consumers of the OnePlus 3 criticized its screen and aggressive RAM management, with one particular reviewer calling it the worst display he had ever examined. The company had responded to these criticisms by promising to resolve them in a software upgrade.

OnePlus hasn’t announced it officially yet, but the update has been reported by several users in the manufacturer’s forums. As per the screencaps above, OxygenOS 3.2 weighs in at a hefty 396MB and introduces a new sRGB mode. The setting is accessible via Developer Options and is supposed to allow individuals greater control over their display, letting them tone down the colors in the handset.

The other big change concerns RAM. The changelog mentions that the update will bring improved RAM management to the table. It should relax the OnePlus 3’s aggressive system which forces only a few apps to run in the background despite there being 6GB of RAM.

Other major modifications which should benefit the OnePlus 3 include Google’s latest security patches, better GPS performance, updated custom icon packs, enhanced audio playback, and superior camera quality and functionality. The brand has also fixed things like bugs in the clock and music apps, notifications, and gallery.

A quick look at the specifications of the OnePlus 3:

The OxygenOS 3.2 update for the OnePlus 3 will probably be rolled out over the course of the coming days.