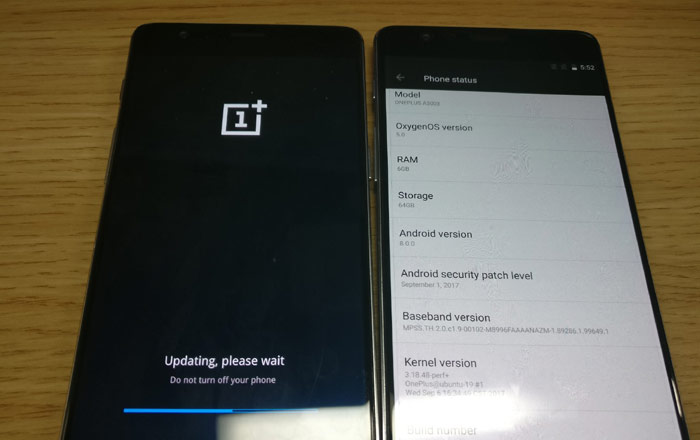 OnePlus has already promised to roll out Android 8.0 Oreo for the OnePlus 3 and OnePlus 3T, but hasn’t fixed a timeline for this yet. As it turns out, folks might not have to wait for months for the update to arrive since the company has already begun pushing out the upgrade to closed beta testers.

This is a pretty fast turnaround since Android 8.0 came out just a few weeks ago. It should be noted that only the closed beta group is getting its hands on the OS right now. The more accessible public beta build will probably come out by the end of September. The road to an official rollout is unclear right now, but shouldn’t be too far off in the future.

The closed beta update being beamed out right now is far from stable. OnePlus told testers in a message that there was a high chance the OTA upgrades would go poorly and asked them to take logs if anything went wrong. Once installed, they’ll have to be ready for nonfunctional NFC, unstable hotspots, unreliable Bluetooth, and buggy Wi-Fi.

The OnePlus 3T and OnePlus 5 are set to get a bite out of Oreo next within the closed beta group. The company is hoping to have a stable build for all 3 up and running by the middle of September. This will logically be followed up by a public beta release at the end of the month, as mentioned above.

OnePlus may easily become one of the first companies to offer Oreo to its customers if it follows this timeline. Android 8.0 will be the last major update for the OnePlus 3 and OnePlus 3T, with the company having confirmed this last month.