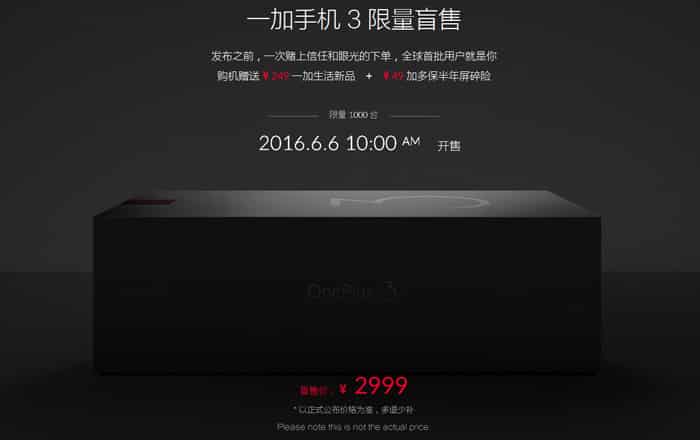 The OnePlus 3’s June 14 launch may only be a few weeks away at this point, but that hasn’t stopped the company from putting the phone up for sale anyway. 1000 units of the upcoming handset will be available on June 6 in a flash sale set to take place in China.

Somewhat confusingly, the early release of the OnePlus 3 both does and does not give away the price of the flagship phone. Its cost is listed at RMB 2999 (approx $455). However, the company is quick to note that this is not the actual retail value of the device. The real amount will be officially revealed on June 14.

This puts eager buyers in a quandary since it essentially makes buying the handset early a betting game. OnePlus is trying to alleviate this dilemma by promising to pay the difference back if the final cost is lower. Conversely, if the smartphone vends for more than RMB 2999 they’ll have to pay the difference.

If they feel like the added cost isn’t worth it in the latter scenario, they can choose to cancel the transaction with no harm done. This entire back-and-forth comes across as a bit labor-intensive, especially considering the fact that OnePlus isn’t even planning on delivering the handset before the launch date.

This might take the sheen off the entire endeavor for some people. Still, they’ll probably be among the first ones to get their hands on the OnePlus 3, with the brand claiming that it’ll begin the shipping process for the orders from the unveiling day itself.

As for the individuals who won’t count themselves among the 1000 early birds, they can purchase the OnePlus 3 on June 14 via what the company dubs as the world’s first global VR shopping experience.