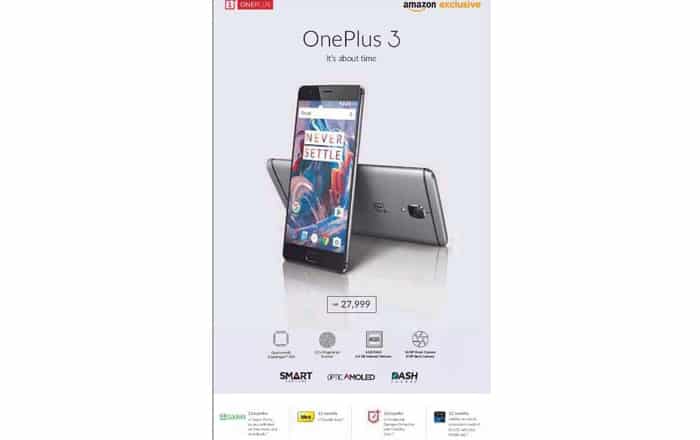 In bad news for OnePlus but excellent news for its fans, an ad for the brand’s flagship OnePlus 3 has gotten published in an English newspaper in India a day early. The phone is set to be launched at 10pm in the country on June 14, but it looks like someone messed up the dates and gave the closely guarded secret away.

The ad reveals a great many details about the OnePlus 3. Firstly, the phone is priced at Rs 27999 (roughly $416) for the 64GB of ROM and 6GB of RAM version. There’s no other variant listed, but previous rumors have suggested there will be multiple storage models up for grabs.

Moving on to specs, the ad confirms a number of features which have gotten leaked previously. The OnePlus 3 is set to play host to an Optic AMOLED screen and be powered by a Qualcomm Snapdragon 820 processer. The physical home button will double up as a fingerprint scanner which can apparently unlock the phone within 0.2 seconds.

Also See: OnePlus 3 gets snapped in the wild

Other features mentioned in the advertisement include Dash Charge and Smart Capture. The former is likely referring to fast charging technology as per earlier speculation. Interestingly, there seems to be some sort of error in the ad since it mentions that the OnePlus smartphone carries an 8MP back camera and a 16MP front lens.

It’s probably the other way round, at least going by previous speculation. The leak also reveals that the OnePlus 3 will be bundled with 12 months of Saavn Pro subscription, 12 months of an Idea double data offer, Rs 500 worth of books via Kindle, and a year’s worth of Accidental Damage Protection under OnePlus Care.

More details about the OnePlus 3 will be announced at its official launch at 10pm IST or 12.30pm EST on June 14 via the brand’s Loop platform.