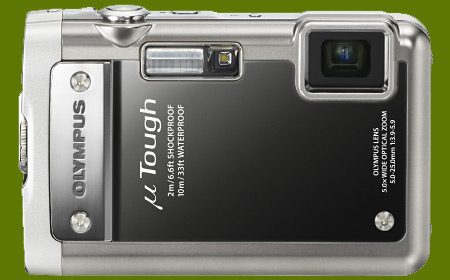 Olympus has obviously been doing lots in between switching back and forth their love for Mt Takachiho and Mt Olympus in the past 90 years or so. With a significant history in cameras, whether it’s showing off the PEN models or nipping competition in the bud with the more recent Tough portfolio, there surely is much brewing. Many doubts were cleared when Olympus had the SP-800UZ fitted with a 30x zoom and you can’t really ignore the company’s confidence with the Tough series cameras too. How many manufacturers have you actually heard saying ‘Do not handle with care’! We set out to hone our photography skills with the Olympus Stylus Tough 8010 as our weapon of mass capture and we’ve scribbled down just what we encountered in an all-embracing review.

The camera was placed in some tattered paper cushioning which left us wondering why it should need any of that in the first place, it’s meant to be brawny remember. A successor to the Tough 8000, this camera was accompanied by just the charger and nothing more. Its industrial-grade aluminum finish makes it a very rugged looking device that’s all ready to plunge right into the action. Some close cradling will let you know it’s slightly on the heavier side at 215gms especially if you’ve had other compacts in your arms lately. As far as dimensions are concerned, they amount to 3.9” x 2.5” x 0.94” which is pretty much standard. With claims of being the roughest and toughest snapper around, Olympus does a good job at keeping the tailoring of the 8010 as simple as possible.

The main HyperCrystal III View LCD screen is approximately 2.7” in size and boasts of a 230,000 dots resolution. The fingerprint friendly screen is anti-glare though, which quite proved its metal when out in harsh sunlight. Right next to the screen are the buttons and knobs that make getting around the camera child’s play. The topmost area includes two separate buttons for zooming in and out followed by the image/video switch button, a speaker grill below and the playback button. A five-way navigation key allows surfacing through the device while also holding the Info and Delete functions with a center OK attribute. The Menu and the Help keys are seated right beneath this. Along the interior right edge of these functions is the loop for handstrap while the perimeter here houses the compartment for battery, USB port, HDMI port and SD card slot. Sealing the deal for weather-beaten times this gizmo will face is a secure double metallic lock which we learn eventually did keep harsh environments from affecting the inside of the device. Along the top edge is the Power button and the click button. Turn over the camera and there’s the lens complete with a retracting shield protection and the flash light. 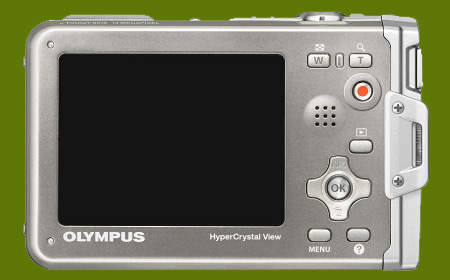 Inscribed here is just about all you’ll need to know on how tough the camera is. So it’s shockproof up to 2m and waterproof up to 10m besides having a maximum resolution of 14MP complemented by a 5x optical zoom, 28mm wide lens. We also want to believe the makers when they tell us that the device is crushproof and can withstand around 220 pounds of pressure. (We tried hard to stop ourselves from putting it under the scanner for this one). The aluminum treatment rounded off by metal bolts does more than its bit to keep the camera tough when outdoors. The fact that it also claims to be freeze proof up to -10 degree Celsius will certainly put a smile on the face of snowboarding fans. Olympus seems to know just what Zig Ziglar meant when he said ‘When you are tough on yourself, life is going to be infinitely easier on you.’ And it looks like this is one camera you’d want to proudly pass down the hands of every careless individual you meet.

The interface on the Mju Tough 8010 camera is intuitive and helpful which won’t really have you searching for functions. There’s the option to shoot with effects like Pop Art for much vivid images using Magic Fliters. We loved the drawing and fish eye effects in particular. Modes like Beauty, Scene, Panorama and Portrait also kept us busy. If you’re a no-hassle photographer who just believes in point, shoot and go, then the iAuto mode has been perfectly designed to do just that. The Panorama feature definitely isn’t the best among the breed but it’s quite functional anyways. Those who love getting into the details can tweak the shooting settings as per their preference depending on what the subject of their fancy is. From documents and snow beach to portrait, there’s much to choose. Right there and then after images have been captured, you can choose to view them in slideshow or give them a Beauty fix, edit for color, calendar, shadow adjustment and redeye.

Flash firing options span auto, flash off, remote control, red eye and fill in while self-timed images can be clicked in 2s or 12s. The camera features Dual Image Stabilisation too which quite suppresses blur during motion though not completely. The rugged-ability of the device is taken a step ahead with the Tap Control attribute which is actually quite a neat inclusion for those on the road. A simple tap along the sides enabled us to tweak not just picture playback but also shadow adjustment and flash controls. Advanced Face Detection works well for group images, leaving no one in particular feeling left out. Incited by the integrated TruePic III image processor, the camera isn’t that great at handling images faster. With a definite lag between clicking images, there are some doubts on how much of a true accompaniment it would be for spontaneous moments.

Bundled with around 29 different shooting modes, the integrated flash’s stint in this camera is commendable nevertheless. Supporting JPEG images and MP4 videos, getting the camera paired up with the PC wasn’t much of a bother too. There’s nothing your average camera doesn’t offer you that this device will in terms of image quality. We aren’t really putting down the quality of still images, but it’s definitely not something you can paint town red about. When we had the ISO levels too low, it only ruined our images by making them overly processed and doing just the opposite didn’t do wonders to image characteristics either. The Mju Tough 8010 has a decent video quality recording movies at 720p in HD. We were surprised at how good the device was at picking up sounds even during our underwater antics. The camera surely isn’t fashioned to make a movie of fast moving subjects however.

Olympus has been smart enough to pack in a more or less complete in-camera manual which should be helpful to novice photographers. Watching HD movies and the added HDMI control does enhance the odd movie watching experience. We also appreciate the camera’s internal memory of 2GB that suffices basic digital photo album needs considering most cameras don’t let you do much minus an SD card. An LED illuminator and manometer stand a chance of much needed attention too. The company says its lithium ion battery should satisfy users with around 200 shots continuously, we beg to differ with having got only around 180 shots. It does however charge rather quickly within half an hour to be precise.

The camera packs in a wide range of modes and effects with enough memory for primary requirements.

The tough look of the camera goes well with its compact form factor.

The in-camera guide is useful and instructive.

The device is certainly heavy.

The evident shutter lag and increased delay time in between shots can be a put off.

There’s no denying that the Olympus Tough 8010 isn’t the best choice in terms of image quality. But it sure fits the bracket as a rough and tough digital compact camera that can be taken around for some serious trekking, scuba diving or whatever it is that fits your idea of outdoor excitement. We mark the camera at a neat 8.7 out of 10 for doing that well.

The Olympus Stylus Mju Tough 8010 camera bears an MRP of Rs. 19,999 which isn’t really a bad deal for a device that offers a little more than your regular digital compacts.