Olympus has announced two new point-and-shoot digital cameras from the Stylus range into the market which include Stylus 1050 SW, Stylus 1040. 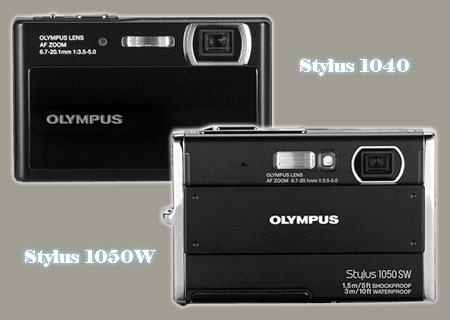 The first one to keep you out of worries is the rugged 10.1mp Stylus 1050 SW. And how does it keep you worry-free? – It is shock-proof, waterproof, and freezeproof claims Olympus. So in case you drop it from a height of 5 feet, or submerge it to approximately 10 feet deep (3metres) or the temperature drops below -10 degree Celsius, the camera will still be efficient enough to capture your smile.

Talking about smile, Stylus 1050 SW camera also features the face-detection and smile shot that can automatically focus on up to 16 faces and capture a spontaneous smile in three consecutive shots. It also features 3x optical zoom. The best feature of the camera happens to be the ‘tap control’ which enables the maneuvering of the camera possible even while you are fighting frostbite with large gloves claims Olympus. For example just tap the sides of the camera twice for flash or shadow adjustment.

Available in blue, champagne, silver and black colours, the Stylus 1050 SW is estimated to be priced at $299.9 and can be expected to be launched in October.

Now comes the time for some style from Olympus as it presents the less-than-an-inch thick (0.65”) Stylus 1040, the thinnest from Olympus it claims. The 10mp camera with a smile detector also features an intelligent auto that automatically adjusts itself to portrait, landscape, night portrait, macro, or sport by identifying the scene you are shooting. With the shadow adjustment technology, face detection feature of upto 16 faces, Digital Image Stabilisation, compatibility with 2GB and under xD-Picture card and 2GB/under to 4GB/higher microSD cards, the Stylus 1040 camera is all ready to capture still images and movies with 3x optical zoom for a suggested price of $199.99. Stylus 1040 will be made available by October.