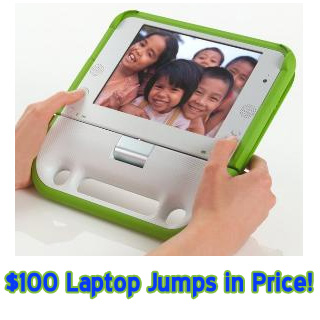 The XO laptop is the brainchild of ‘One Laptop per Child Foundation’, a non profit group that heads the project. The reasons for the price hike have been attributed to increase in the cost of raw materials such as Nickel and Silicon. So now the price of the laptop is practically double than what was projected earlier by OLPC’s founder, Nicholas Negroponte.

George Snell, spokes of OLPC stated that at present the foundation was testing the XO laptop and was ensuring that all the software were working just right. The laptops bundle AMD microprocessors and Red Hat Linux software. Reportedly Microsoft is testing the laptops to establish whether they have the ability of running Windows OS.

OLPC wants to sell the laptops directly to governments that will then give them to underprivileged children absolutely free. But all the same the foundation hasn’t revealed any orders as of now, adding that currently they are in talks with several countries.

George Snell maintained, “We are not disclosing any orders until we have a final computer. We are in talks with dozens of countries.” He further continued that the project was committed to keeping the price from rising above $190.