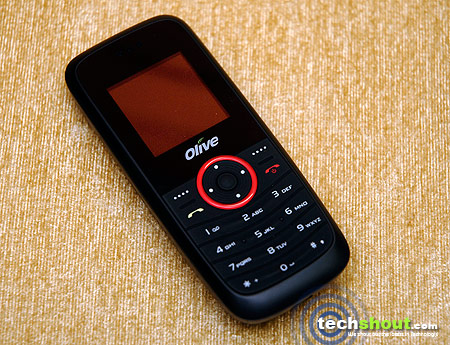 The break of dawn on the mobile world seems to bring in a fresh batch of innovative phones each day. We sure seem to be having our hands full with a number of Olive products knocking on our doors. Just last month we detailed the company’s OlivePwrr Dual-SIM phone. Early last week we witnessed the launch of what Olive claims to be India’s first Hybrid mobile phone also operating on AAA batteries namely the FrvrOn V-G2300. Well, no points for guessing, we’ve got this one right under our kitty all ready to be reviewed.

Here’s what a brief run through the feature list revealed: a 1.5” color display, built-in FM radio, stereo headset, speaker phone and included AAA batteries. Backed by a 1 year warranty, the handset was also accessorized by a headset, a travel charger and user manual. Seated right in the middle of the box was a rather diminutive black colored phone. Yes, the FrvrOn quite surprised us by its tiny size and at just 250gms it’s interestingly super light also.

For a basic handset, the looks of the phone were quite pleasing. The overall plastic chassis assures the phone a simple yet distinct look while the slightly concave back panel displays semicircular patterns that further add to the appearance. In a compact candy bar form factor, just below the tiny screen is the Olive logo. Right below the logo is the rubberized keypad that includes four main buttons including a yellow call answer and a red call disconnect one. A circular navigation pad with a red finishing is located between the four buttons. You can set shortcuts of desired functions to the left, right, up and down keys of the navigation pad.

Clicking on Menu exhibits a very simple and neatly organized interface with each function appearing as if seated in square shaped buttons. The Messaging function supports simple text messages and voice mail as well while Call Records offers details on the missed, received and dialed calls. The phone has a 200 contact saving capacity while a simple network service feature let us play around with the call waiting, forwarding and barring options. As if the poor FM Radio reception was not bad enough, it was complemented by a manual frequency setting which was quite annoying. The phone’s loudspeaker too was not up to the mark with the audio output sounding rather noisy.

The FrvrOn wraps in two games mainly Tetris and Sudoku. The colored bricks in Tetris literally took us to those carefree days when playing games was just that. With a choice of Standard, Conference, Outdoor, Mute and My Style profile settings, the phone also allowed us take our pick from a large number of ringing tones. Without sounding too brutish, we disdain the sound of those polyphonic tones though. For a pretty basic handset, the phone packs in quite a few display settings as well. While the LCD contrast can be set to a maximum of 10, you can also opt from three wallpaper and theme settings. A number of languages besides English like Hindi, French and Indonesian are further supported by the handset. Finally the FvrOn also houses basic applications such as Alarm, Calculator, Calendar, Memo, Stopwatch and Time Zone. 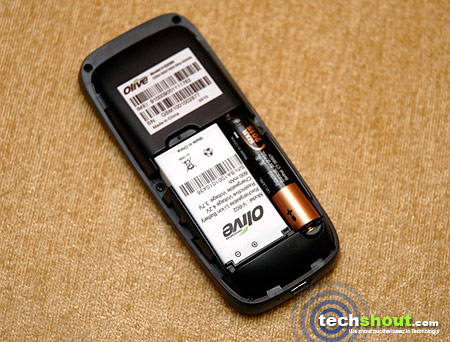 Without a doubt the AAA battery option should give the phone an edge over other competitive entry-level devices in the market.

Despite the rubberized texture of the keypad, it’s quite comfortable when typing messages.

The phone is feather light and its compact form renders it effortless to tag around.

The phone pretty much wraps in everything you’d want in a basic handset particularly making it a very good choice if splurging on mobile phones doesn’t make it to your wish list.

With a ‘not so good’ radio reception, the audio quality is really poor and could have been much better.

Olive could have also thrown in a few more color options.

While there may appear to be an overload of complicated and feature-rich phones, it’s still something about the basic entry-level phones that entices pure communication lovers. Minus the frills and fancies, it’s just about making calls and sending messages at the end of the day for some. If you’re among the handful that endorses this very purpose of a mobile phone, the Olive FvrOn will surely strike a chord with you. It’s certainly a neat interpretation of a simple phone at a very attractive price. We’d rate the phone 8 on a scorecard of 10.