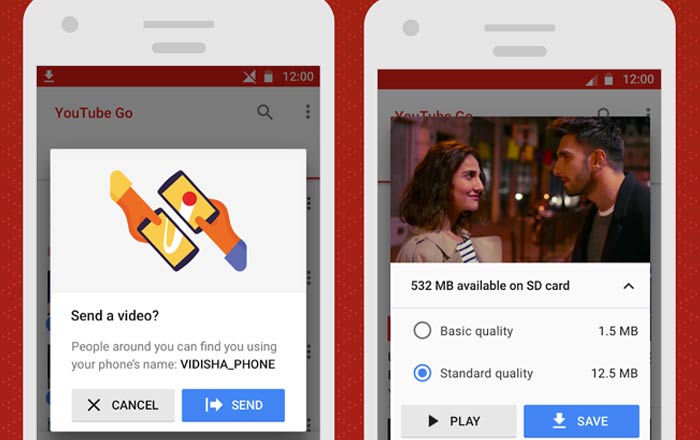 YouTube Go, a lite version of the regular app for Indian audiences, has officially been released on the Google Play Store. The application was first announced back in September 2016 and has been in testing since.

However, YouTube Go isn’t quite ready for the big leagues yet since it’s the beta version of the app that’s gone live. A full launch may be on the cards a bit later down the line. The application weighs in at just 8.5MB, making it easier for people with limited storage space to download it.

While the core features of YouTube Go haven’t changed since its debut, Google has made some significant changes over the course of testing it. For instance, it apparently made the home screen fresher and more relevant for consumers. It’s also tried to make sure the video sharing tool is seamless across a wide range of devices and connectivity levels.

As per Google, users can send and receive videos using the video sharing tool without incurring data charges whether they’re offline or online. It requires people to be close at hand and apparently takes place in seconds. The aforementioned home screen showcases trending and popular content specific to a person’s area.

YouTube Go also lets individuals preview a small snippet of the video when tapping on the accompanying thumbnail, letting them decide whether they want to invest their time and data into watching the whole clip. They can also pick their preferred resolution to watch videos in, allowing them to see how much data a quality will require.

Users further get to choose whether to stream or download a video. The latter can be saved to a phone’s internal memory or SD card. YouTube claims that the app is optimized for slow or non-existent speeds and is compatible with older Android versions stretching back to Android 4.1 Jellybean.

YouTube plans to listen to feedback and integrate more improvements before launching YouTube Go more broadly. The beta app can be downloaded via the Google Play Store.