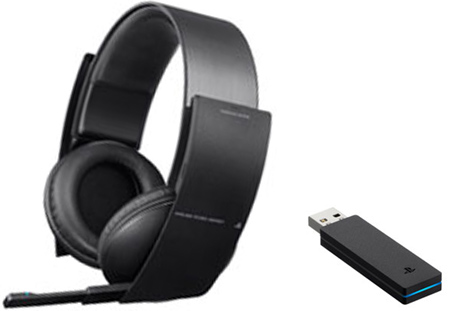 The newly unveiled official Sony PS3 Bluetooth headset claims wearers will be able to hear the enemy before being spotted themselves owing to its 7.1 digital surround sound. Well, if that’d get users to exercise the finger on the trigger faster than ever, no one on their Counter Strike team is complaining, are they?

By virtue of the name, there’s no need to wonder if these over-the-ear headphones come without the mess of cables. Showing off easily accessible volume and mic mute controls, it’s powered by a rechargeable battery, features a retractable microphone and is simple enough to set up, according to Sony. The Sony PS3 Bluetooth headset is touted to serve more than just those gaming needs, with Netflix, Blu-ray movies and so on set to take advantage of its audio quality.

“The wireless stereo headset gives you an audio advantage and high-quality voice quality (with a retractable microphone) at a seriously affordable price point. And yes, the official Wireless Stereo Headset pumps up more than PS3 games – Netflix, Blu-ray movies and more will benefit from the Wireless Stereo Headset’s crisp audio quality,” says Abby Reyes on the official PlayStation blog post announcing the launch.

But the PS3 headset is not last bit of Sony-stamped hardware lined up for fans. There’s the $69.99, 24” PlayStation 3D Display arriving this fall along with 3D glasses and the Resistance 3 game. And in November, the Urban Camouflage Bluetooth headset and Urban Camo Dual Shock 3 controller will also be reaching stores.

Amazon was selling the official Sony PS3 Bluetooth headset for around $95 when we last hit up the website. On the other hand, GameStop and Best Buy have it tacked at a price tag reading $99.99.