Samsung has beat Sony to the punch by scheduling a launch event for the Galaxy Note 3 a day before the Japanese conglomerate is expected to unveil its Xperia Z1 flagship in India. The newest phablet will make its appearance on the 17th of this month along with the Galaxy Gear smartwatch, but there’s no confirmation on whether the company plans on bringing the refreshed 10.1-inch Note tablet on the same day.

The Galaxy Note 3 was launched last week during the IFA 2013 along with the other devices mentioned above. The phone is the third iteration in its series and it’s amongst the first few to support 4K video recording. The handset runs on Android 4.3 which is yet to roll out to a plethora of non-Nexus devices. The phablet is accompanied by an enhanced S Pen that’s optimized for even more features. Where specifications are concerned, it sports a 5.7-inch 1080p Super AMOLED display, a 1.9GHz Exynos Octa processor (the LTE variant has Snapdragon 800), 3GB of RAM, storage options of 32GB or 64GB and a 3200mAh battery. 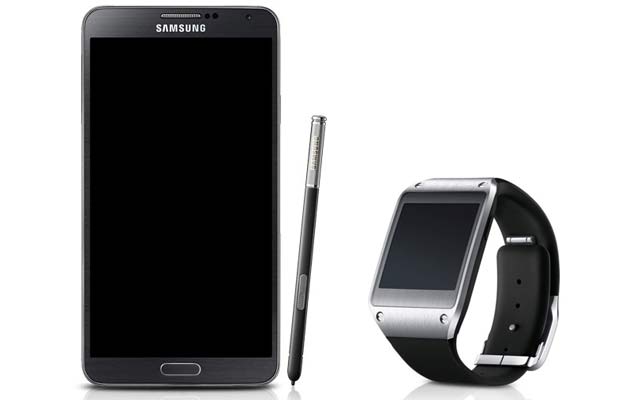 The Galaxy Gear is not the first smartwatch in the market, but unlike the rest, this one only supports the Note 3 for now. The device allows you to answer calls, carry out tasks via voice with S Voice, check notifications and even capture images using the built-in camera.

The company’s India eStore is accepting pre-orders at Rs 2,000 for the Note 3 and a combo bundle which includes the Galaxy Gear smartwatch. No price or availability details have been mentioned, but you can check back on the 17th for more information.