Microsoft seems to have understood the importance of co-authoring and collaboration and has thus introduced these features for its Office Web apps. It will now be possible to collaborate in real time with colleagues or friends for editing documents in online Word, Excel or PowerPoint utilities.

Similar to Google Drive, the applications will tell you when someone else is editing a certain area of a document so you do not end up changing it too. This particular feature plays an important role when co-authoring pages with multiple users. As you may already know, the Office Web apps are nothing, but online versions of the original productivity applications including OneNote, which facilitate document creation and collaboration anytime, anywhere. 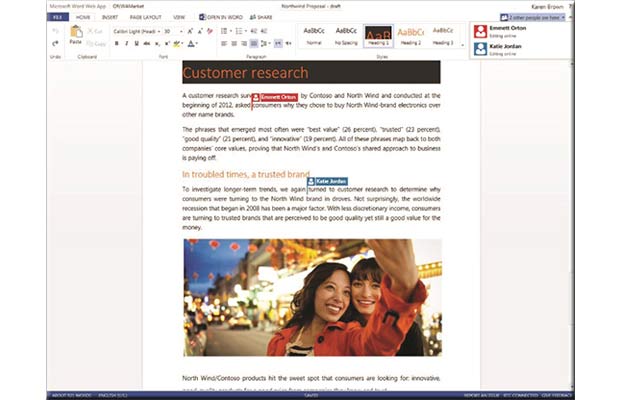 The web apps give users the flexibility of working across platform and devices such as desktops, Windows and iOS tablets or smartphones. It is even possible to work in offline applications and synchronize the edited documents with the online versions in the cloud for sharing purposes. In case a team mate doesn’t have an active internet connection at all times, his changes will get saved and synched as and when the person comes online.

Moreover, the software giant has also updated the utilities with new attributes. The Word Web app has been bestowed with refreshed formatting controls, the finding and replacing feature, styles and formats for tables, headers and footers and much more. As for the online Excel tool, it now extends support to more types of workbooks and allows you to drag and drop cells, reorder sheet and view data analysis in the status bar amongst other things. Similarly, PowerPoint tries to assist you with making visually attractive presentations, thanks to its picture cropping functionality.

The new features for the Microsoft Office Web apps have already been rolled out.