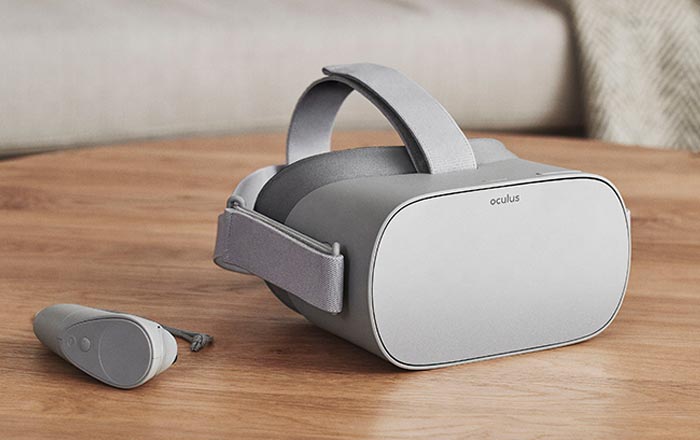 Facebook and Oculus are diving head-first into standalone VR headsets, announcing the brand-new Go and sharing updates about the Santa Cruz. The latter was unveiled a year ago as a prototype and is now getting closer to release.

Standalone VR headsets are free of PC rigs and phones, allowing users to explore their environment free of tethers. The Oculus Go is being pitched as an entry-level independent device, priced at just $199. The figure positions it in the sweet spot between the $129 Samsung Gear VR and $399 Oculus Rift.

This might make the Go more appealing to consumers who don’t have a Samsung phone on hand and don’t want to invest in an expensive PC setup. The headset will be a cousin to the Gear VR, allowing people to play games via the bundled controller, indulge in some social VR with friends, and watch movies when it ships next year.

Oculus has constructed the gadget out a lightweight fabric to make sure it’s soft and breathable, important factors considering how tiring it can be to have a machine stuck to a face for long hours. There’s no mention of battery specs yet, but it’ll probably be short given all the processing which has to be done in-house.

The screen inside the Go is of the 2560 x 1440p fast-switch LCD type, meant to enhance visual clarity and reduce the screen door effect. There’s also a wide field-of-view with reduced glare. Users will hear the benefits of integrated spatial audio through the in-built speakers.

As for the Santa Cruz, the device is also a standalone VR headset. It’s superior to the Go in that it boasts of inside-out tracking, letting players walk around a virtual environment. Oculus has now shown off two positionally tracked controllers that work with the headset’s sensors for completely unrestricted movement.

Finally, the original Oculus Rift has gotten a permanent drop down to $399. That’s a $100 cheaper than before, making it more competitive against rivals like the $599 Vive.