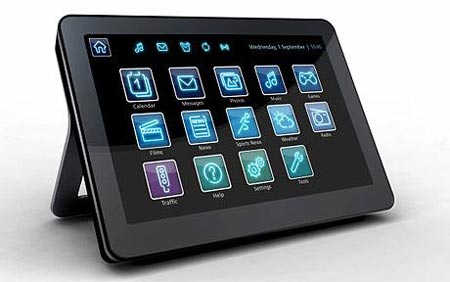 O2 has released “first-of-its-kind” device that will help “busy families” manage their schedules. Dubbed as the O2 Joggler, the device can be called an electronic sticky note or an electronic calendar!

The device claims to be more than an electronic calendar as it also carries out functions of updating the user with weather from 60 UK towns (all A roads and Motorways in England, Scotland and Wales) with the help of Sky News Weather. It also gives traffic updates via Trafficmaster and reports on the traffic speed on major roads. Also, news and sports headlines can be accessed from Sky News via the device.

The device can also transform itself into a digital photo frame and store up to 200 MB in its internal memory of 1 GB and can also connect to external USB memory. As if this is not enough, the device also plays up to 100 songs and or videos that have been saved in it. It has built-in speakers and it can also stream content after being connected to a PC. However, it does not support the iTunes format files.

Want more? It also gives you the option of getting entertained with games like Sudoku. Other applications in it include tools like the alarm clock and calculator. The soon coming features on the O2 Joggler are messaging capabilities; however it will support sending messages only to O2 mobiles in UK. Also in the offing are O2 Calendar and radio.

O2 Joggler will be launching in the month of April, 2009 at O2 stores and on O2 online shop for a price of £149.99. Another tempting offer O2 has revealed is that O2 Pay Monthly customers on 18 and 24 month contracts can take the Joggler for free instead of a handset at upgrade if their upgrade costs up to £200.