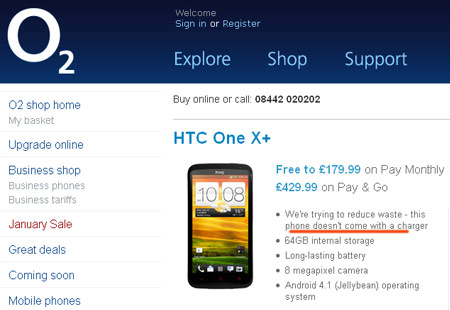 O2 UK has been selling the HTC One X+ phone without a mobile charger (for £179.99 on Pay Monthly or £429.99 on Pay & Go plans). And they’ve got good reason to be doing so – apparently a 100 million of these accessories are lying around unused in the UK alone. These are touted to be from old devices or happen to be duplicates of current kits.

O2’s ‘Charger out of the Box’ initiative had taken off the launch pad in October of last year. The carrier chose to kick-start the program by joining hands with HTC over the One X+. According to the pilot, buyers would be sold the smartphone merely with the standard USB to microUSB cable. Those who wanted the charger were given the option to pick one up for a price. The company notes that they don’t earn anything extra by selling the device separately. 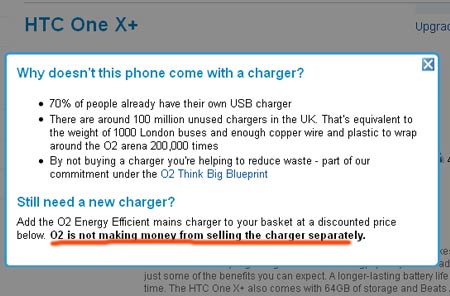 A huge, 82% of customers elected to purchase the HTC handset without the peripheral. These numbers were 12% higher than the tentative 70% target set by the service provider who is presently encouraging other companies to tear a leaf out of their book for the sake of the environment. The British carrier’s Think Big Blueprint strategy is also taking on pushing recycling and endorsing just one charging device to juice up various gadgets. The said sustainability plan will be spread out through three years.

Some interesting facts and figures in relation to the 100 million unused accessories in question have been thrown up – The total 18,700-ton weight of the components would roughly be the same as that of a 1000 London buses. All of this could fit into four Olympic swimming pools, if the volume of landfill was to be considered. Lastly, we’re looking at a substantially lengthy 1,24,274 miles of plastic cover and copper wire which would be part of the waste. 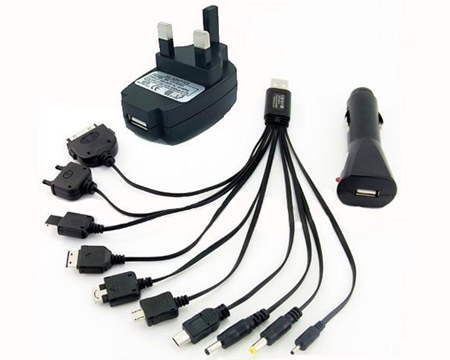 Going by the O2 report, every year people lay out the cash for roughly 30 million new phones in the UK. If all such devices are vended in a manner which adopts the carrier’s pilot program, the distribution of chargers is expected to be cut down by 24 million in the region. The significance of these figures in terms of environmental savings can hardly be overlooked.