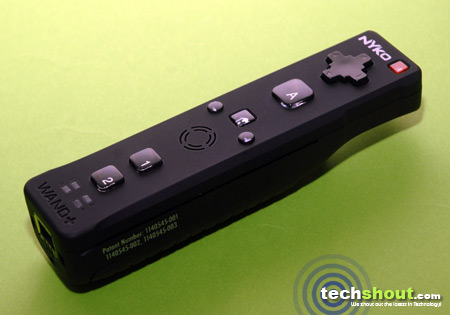 It was CES 2009 when Nyko debut their Wand controller which actually gave gamers a good hand at transport technology. The uninitiated may want to know that the technology is one which allows control and sending of commands via the rearmost Nunchuk port. Well, it didn’t take Nyko much to figure out that they could well do away with the burden of the dongle that came along with the Wiimote and have the MotionPlus technology built right into a controller. Yes, we are very much talking about the Nyko Wand + accessory that’s been sitting in our review labs for quite some time now. We had it thoroughly investigated all through the week and here’s what our overview of this gaming accessory says.

Leaving out the hassles of having to fasten Nintendo’s additional accessory to the bottom of the device so as to be motion control enabled, the Wand + looked alluring at a first glance. The unit we reviewed was dressed in a dapper black suit. There’s an option of picking it up in white too. The box bundling the controller included a user manual and a hand strap while the device itself was accompanied by a rubber casing to protect it in tough times. The overall feel of the device hasn’t changed much in comparison to the original Wand counting the plastic frontal area, though the new matte covering at the back gives it a nice rugged appearance. The rubberized texture is complemented by the rib battery cover that is slightly raised and has the same tailoring. The black coating extends up until the B trigger button seated right above the battery compartment. 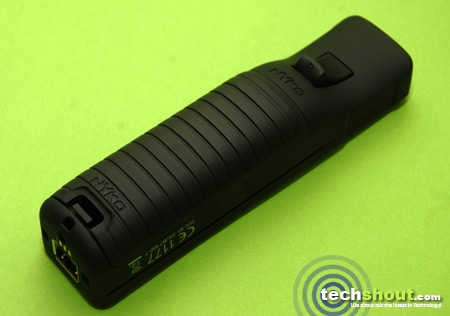 Adopting a very neat form factor, the Nyko Wand + controller is sprinkled neatly with nine buttons all through. The sleek gaming arsenal reveals a power button in red on its topmost area to the right. Right below this is the four way navigation key with its edges slightly raised along the device’s surface. Moving further down, we noticed the ‘A’ button in a squarish form having rounded edges. The home key has been placed exactly under this knob and has the ‘-’-and ‘+’ keys on either side for company though slightly lower down. There is a speaker circular outlet on traversing below which is followed by the numerical ‘1’ and ‘2’ keys. The bottommost area on the front face of the device is lined with a quartet of LED lights that blink in accordance to their functionality. Look under the device and you’ll find the Trans-Port technology enabled port which simplifies the process of fastening a Nunchuck or any other compatible accessory to the controller. You can’t miss the generous Nyko and Wand + inscriptions on both the front and back of the device.

We donned our gamer garb and got right to putting this controller through its paces. With the manual in hand, synchronizing the device with our Nintendo Wii system wasn’t much of a hassle. In fact it took us precisely under 15 minutes to get the two hooked up. We started off with the Nintendo Wii Tennis tournament to gauge the motion control abilities. In comparison to our WiiMote, the device felt much more responsive. However, unlike the very sleek profile the controller seems to adopt, it felt slightly heavier in the hands when pitted against the WiiMote. That quite took us by surprise considering the additional dongle has been left out and ideally the controller should have been much lighter. Despite the bulky feel, the device can claim to be quite agile. Its ergonomic form factor enables it to fit the hands of any gamer well. 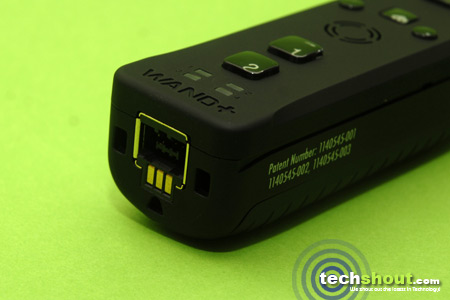 We had the Nyko Wand + controller fitted with a tennis racket for a more true-to-life tennis experience. It was all smooth sailing until we tried using the menu for commands. Boasting of the ability to pair up to four players, you can enjoy wireless play from as far as 20 feet away with this device in hand. Yes, lie back in the couch and get past through adventures minus any glitches. We also spent a good enough time in the ring when playing the boxing game. The connected Nunchuck together with the Wand + ensured we had our opponent down with unbeaten precision. After loading up our copy of the Wii Sports Resort title, we chose to engage in Sword Fighting from among the array. Spelling dexterity all the way, the controller empowered us with skilful movements in an effortless manner.

We employed the controller when playing a host of other games too and it seemed to perform just as well. To say our enthusiasm fizzled out as soon as we stepped into shooter games though would be putting the controller down. But, it was the gamer inside us that wished the Wand + would have acted out better on this front. Nevertheless, the incorporated speaker on the controller quite made up for the otherwise downbeat gameplay. Audio rendered through this in-built speaker was crisp and refined.

The Nyko Wand + looks really pleasing and despite the firm coating for better grip, it’s very comfortable to use.

It syncs easily with virtually all devices compatible to it.

Screams precision with a plethora of advanced functionalities.

The much affordable price tag attached to this controller should appeal more than a handful of gamers.

More of a personal choice, we would have preferred a bit more sober looking buttons in comparison to the flimsy ones housed on this controller.

Though the controller is nothing that will hurt your arm as such, it’s still noticeably heavier than the Wiimote.

On the face of it, the position of the buttons in totality makes the controller appear slightly crunched for space.

So we all love our Nintendo Wii systems and there have been conspicuous efforts from Nintendo too to do away with gamer grouse if any with the original Wii remote. But we can’t pass through Nyko’s elbow grease of stepping in to deliver just what they thought Nintendo missed out on. At the end of it the Wand + is just your normal Wii controller in terms of performance albeit with the MotionPlus technology imbibed directly into it and might we say rather well. What seems to grab attention all the more is the fact that the controller is much affordable when pitted against Nintendo’s remote. It can be picked up for a mere $39.95. Our rating meter for the Nyko Wand + reads 9 out of 10 for doing just what it’s been assigned well and in a rather stylish manner.