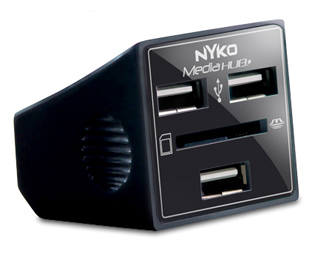 Nyko has announced to release Media Hub for the PlayStation 3. The latest PS3 peripheral can be used to extend USB capabilities of the console. Nyko’s Media Hub will add three additional USB ports and a media card reader slot supporting SD cards and Memory Sticks. PS3 is already equipped with four USB ports and a memory card slot.

By employing the Media Hub, gamers can attach several gadgets such as flash drives, PSP, MP3 players or additional controllers. The Hub is colored into the same as the PS3, so it does not look odd when connected to the console. Also it does not require any additional tools or internal modifications or even external power. The Hub draws power from the PS3 itself.

“We found that many of our customers who had purchased the popular 40 GB version of the PS3, which has less USB ports and no media card reader, were looking for an affordable solution to expand with these features,” said Chris Arbogast, Director of Marketing at Nyko Technologies. “With the Media Hub, an additional three USB ports and a media card reader are now possible for all PS3 models, allowing consumers to enjoy the full capabilities of their multimedia system no matter which model they choose.”