2013 hasn’t quite been a great year for Nvidia. Compared to the number of Qualcomm and MediaTek powered devices, the list of OEMs implementing Nvidia’s silicon is quite scarce. Well, the graphics giant went ahead and produced its own gadgets, the Shield console and the Tegra Note tablet that have gained a good deal of popularity. But here’s the best part – Things could take a drastic turn in 2014.

We’ve seen new SOCs go official from various OEMs including Nvidia, but there’s still time for them to arrive through consumer devices. Well, the 192 core Kepler GPU in the flagship Tegra K1 ‘super chip’ has already been put to its paces and compared to other chipsets like the Apple A7, the Snapdragon 800, the Tegra 4 and the HD Graphics series from Intel amongst others. 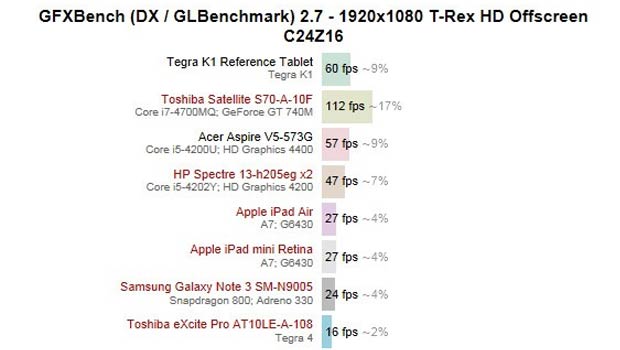 The results are nothing more than amazing. Not only did it out perform the competition in the tablet segment, but also managed to put on a good show in the notebook category where the Intel HD 4400 and GeForce GT 740M GPUs currently dominate. As seen in the chart above, the Kepler GPU in the Tegra K1 managed to peak at 60fps in GFXBench which is slightly higher than what the Intel HD Graphics 4400 scored.

Additionally, it achieved over 2x the fps compared to that of the A7 (27fps) in the iPad Air and mini Retina as well as the Note 3 running on Snapdragon 800. The current generation Tegra 4 scored just 16fps, which shows that its successor means business and could give the competition a good run for its money. The benchmark scores are based on the T-Rex HD off-screen test at 1920 x 1080p resolution and they were spotted on Wccftech.

The quad core A15 version of the Tegra K1 will arrive during the first half of 2014, while the flagship variant with dual core Devner CPUs is slated for release in H2. Both versions will have the same 192 core Kepler GPU.

Facebook
Twitter
Pinterest
Linkedin
ReddIt
Tumblr
Flip
Previous articleRazer’s Project Christine modular PC comes from a planet far far away
Next articleICE xPC is as small as a smartphone and can be used as a tablet, notebook and desktop