There’s no denying that Nvidia is working on a new gaming slate called the Shield Tablet and we’ve finally gotten the first look at the device owing to a leaked press image. The picture only showcases the front panel, but manages to confirm various features from previous reports.

The image you see below comes courtesy of renowned leak artist @evleaks. The company has clearly merged elements from its Tegra Note 7 into the Nvidia Shield Tablet. The dual front-facing speakers are present here and there’s a possibility of seeing stylus support as well. 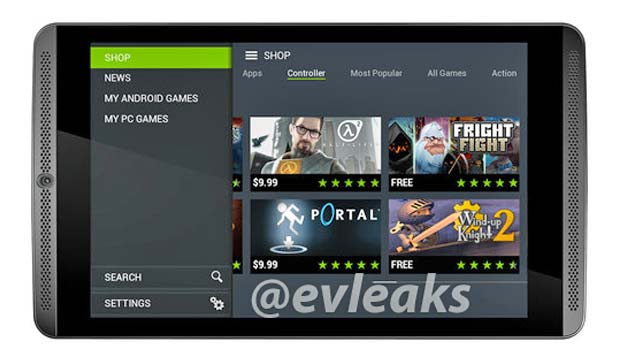 Additionally, the slate is confirmed to run on Android and it’s clearly evident from the UI that the GameStream technology will be onboard as well, through which you’ll be able to play PC titles on the slate. The tablet is expected to be almost an inch taller than the 7-inch Note and it will carry a high resolution display of 2048 x 1536p.

What version of Android it will run depends on when the company plans to launch the slate, but expect nothing less than 4.4 KitKat. Additionally, the device will be equipped with the latest Tegra K1 processor from Nvidia, but the quad core 2.1GHz model and not the 64-bit ready version. Nevertheless, this SOC is a beast when coupled with the 192 core Kepler GPU.

Here’s a roundup of the Nvidia Shield Tablet specs:

The Nvidia Shield Tablet has been certified on the Global Certification Forum (GCF) website and it has even made it through the FCC. And while we know so much about the slate, its price and release date details are still a mystery.