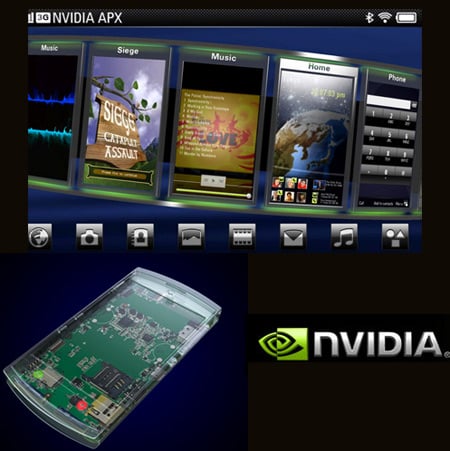 The breakthrough APX 2500 processor offers around 10 hours of 720p HD playback. This standard happens to be a first for the industry when it comes to video quality, power consumption and HD camcorder and ultra-high resolution photo imaging capabilities on a mobile device.

Interestingly, NVIDIA had worked in close proximity with none other than Microsoft for the development of the APX 2500 processor. This shows the passion that the two companies share for making interaction with technology more visual across multiple platforms and definitely marks a significantly long-term relationship too.

Jen-Hsun Huang, president and CEO, NVIDIA said, “This is the dawn of the second personal computer revolution. Technologies are converging in amazing mobile devices that have all of the rich, visual capabilities of a modern PC — from watching movies and making video calls to surfing the web and playing 3D games. The APX 2500 combined with Microsoft Windows Mobile, will make the next generation of smartphones our most personal computer.”

As of now, key customers are testing out the NVIDIA APX 2500 applications processor. NVIDIA’s APX 2500 will enter into full production by the end of Q2 2008.