Move over for a bit Google, a smart glass competitor has risen. NTT Docomo is busy flaunting at least two cool high-tech glasses at the CEATEC 2013 in Japan. One appears to be an awkwardly large headset prototype and the other seems to be what the company or any normal person expects the final product to look like.

What can it do?

Breaking down the various functions built into the gear, one of these turns just about any paper surface into a screen only to the user’s eyes. So to a person not sporting the glasses, it would appear as if the wearer was interacting with a blank sheet. 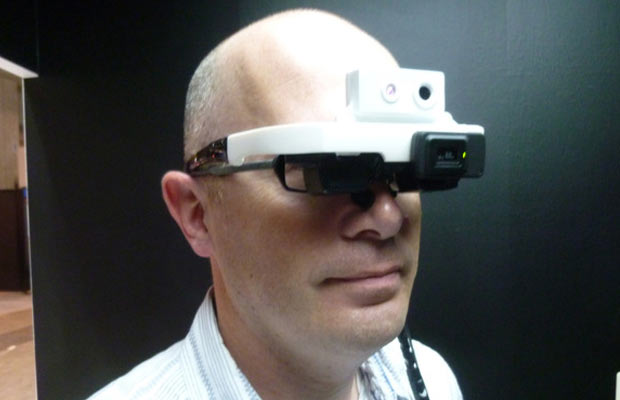 Imagine something like your smartphone’s display projected onto a piece of paper; that’s somewhat how the interface could play out. The size of the virtual screen changes depending on the size of the notepad or sheet in your hand. The head-mounted display technology makes out to be all about the hardware adapting to various environments.

There’s a space interface in which users can play around with virtual objects. TechHive reports that there’s an infrared camera on the glasses which keeps tabs on the wearer’s hand movements so the object they’re dealing with can be manipulated accordingly. No need to be harnessed to a fixed, physical interface like your touchscreen anymore.

Then there’s the translator feature. It is designed to translate text like hoardings, sign boards, menus and more in a language the user understands. The Augmented Reality (AR) capabilities of the device can stretch to provide real-time information such as the name and relevant details of a person approaching the wearer too.

But we bet that old video (posted above) from Sight Systems will give just about anyone the creeps if they imagined what it’s like to be ‘pre-introduced’ to a stranger via their digital footprints.