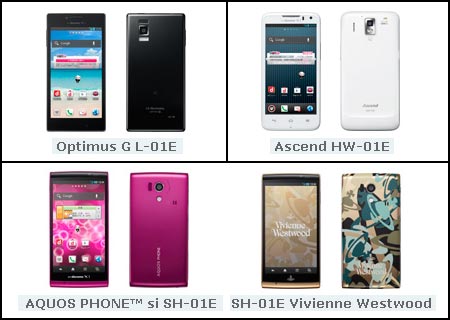 NTT Docomo has announced 3 new smartphones and 2 new tablets set to be launched in or after September. Among them is the LG Optimus G which has just been officially confirmed. All the new products run on Android 4.0 and are available with the company’s Xi LTE mobile service. The others included on the company’s lineup are the Aquos Phone si SH-01E and Ascend HW-01E smartphones, and the Medias Tab UL N-08D and Galaxy Tab 7.7 Plus SC-01E tablets.

Technically named the Optimus G L-01E, the phone features Qualcomm’s Snapdragon S4 Pro quad core processor running at 1.5GHz, and comes with a 4.7-inch TFT LCD screen, 2GB of RAM and a 2210mAh battery. LG has said that this will be a Japanese edition of the phone. For photography enthusiasts, the main camera gets steam from a 13.1MP CMOS sensor, while a 1.3MP secondary camera is also provided.

The Aquos Phone si is a compact smartphone with a 4.1-inch display, a 12.1MP camera and an advanced ‘ProPix’ processor, expected to touch down in October. It will also be made available in a limited Vivienne Westwood edition with exclusive content pre-installed. There will be 30,000 units of this limited production run coming in November or December. The last of the smartphones on the list, the Ascend device features a 1.31MP camera and boasts of a 5-second startup time. It is expected to hit the provider in October or November. 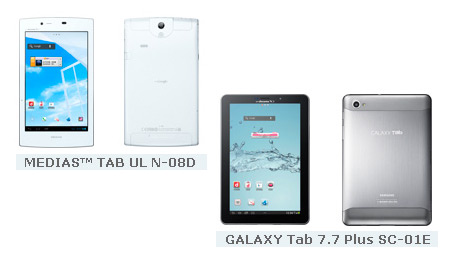 The Medias Tab UL is pushed as world’s lightest 7-inch display tablet and will pack a 1.5GHz dual core CPU in addition to an 8MP main camera HD haptics vibration technology. It is expected to be out in September or October this year. Lastly, hitting the Japanese mobile operator in October or November is the Galaxy Tab 7.7 Plus with its 7.7-inch display and 5100mAh battery.

Three of the five devices on NTT Docomo’s lineup will be compatible with the NOTTV V-high multimedia broadcasting service, but those looking forward to these devices will have to wait a little longer.