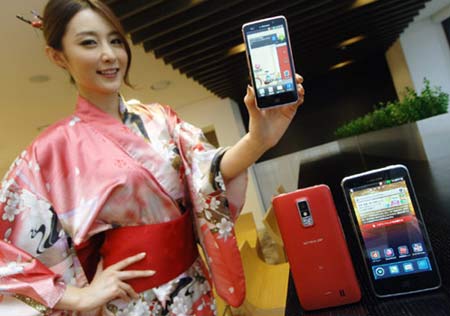 Marking the arrival of an HD LTE enabled handset in Japan, the LG Optimus LTE smartphone is aptly dressed up and all set to make a debut in Japan. The device has already reached regions like North America and Korea, and the company chose NTT DoCoMo as its network carrier this time.

Showing off a 4.5-inch True HD IPS touchscreen, the Optimus LTE displays visuals in resolutions of 1280 x 720p and an aspect ratio of 16:9. The company claims that the screen exhibits about 2.76 million sub-pixels within the images. The rear panel of this gadget is dotted by an 8MP camera with auto focus and LED flash capabilities. This is also supported with a 1.3MP front facing one for video calling and so on.

The device is powered by the Gingerbread OS and offers access to thousands of app from the Android Market. Embedded with a 1.5GHz dual core processor, the phone provides 4GB internal memory along with 1GB RAM. The external memory is expandable up to 32GB with a microSD card. The smartphone happens to run on an 1830mAh battery. 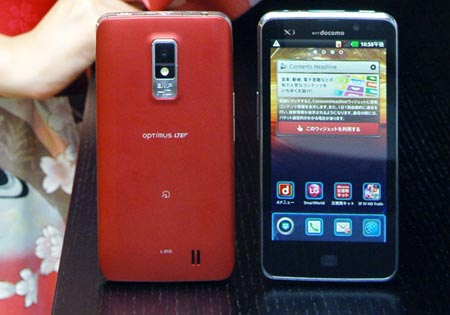 “The Optimus LTE is one of LG’s most promising devices and has already been received well in Korea, Canada and the United States,” stated Dr. Jong-seok Park, President and CEO of LG Mobile Communications Company. “As a worldwide innovator in mobile LTE technology, we are committed to developing high-quality devices that showcase our technical experience and True HD IPS display.”

Subscribers of the aforementioned network carrier should be able to enjoy some additional attributes of the phone not available to others, says the company. This includes features like NFC capability and 1seg digital TV. Also, exclusive to the operator, this handset will be painted in an attractive shade of red.