Now, push your Gmail attachments directly to Google Drive from your Android device

Since long, the web version of Gmail has been allowing users to send their attachments to Google Drive in a one-click fashion. This extremely useful feature enables you to ensure that your important data is safe even if you wish to delete your emails.

A major gripe however was that such a trait was not part of the Gmail for Android app. That has changed now, even as support for the ‘Save to Drive’ feature has finally made its way into this utility. Pushing the three-dot icon on a particular attachment brings up a menu which shows the ‘Save to Drive’ option. 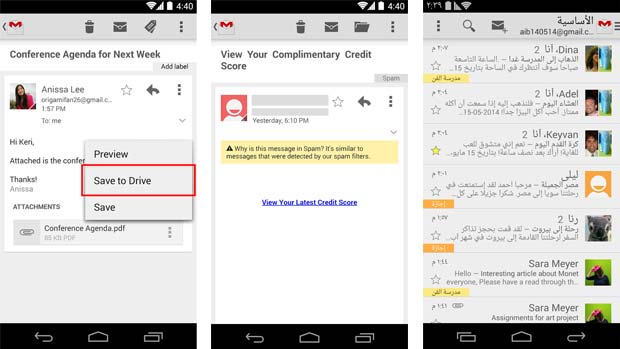 But that’s not all; Google has infused this new update with a couple of other useful additions as well. The Spam section will now show an explanation of why a particular email ended up being segregated there. Moreover, right-to-left (RTL) reading support for languages like Arabic, Hebrew and Persian has been introduced to Gmail for Android as well.

For those who speak the said languages, the whole layout can be changed now to suit their RTL habits. Even the navigation menu which is usually accessible from the left-hand side can be pulled from the right-hand side by these people.

Google has said that while the new Gmail for Android update has already been issued, it will be rolling out over the next few days through the Play store, so don’t be surprised if you haven’t been notified about it as yet.