There were rumors that Nokia would launch a higher capacity model of its Lumia 1520 smartphone on AT&T and it turns out that they were true. The carrier is now offering the phablet with 32GB of internal storage compared to 16GB memory found on the normal version.

The listing was spotted on AT&T’s website by WMPoweruser. The carrier is offering the device in both options and while the 16GB model can be picked up in color options of black, red, white and yellow, the 32GB option is only available in black for now. The Nokia Lumia 1520 is also being offered with the Next installment plan for $29.25 or without a contract at $584.99. 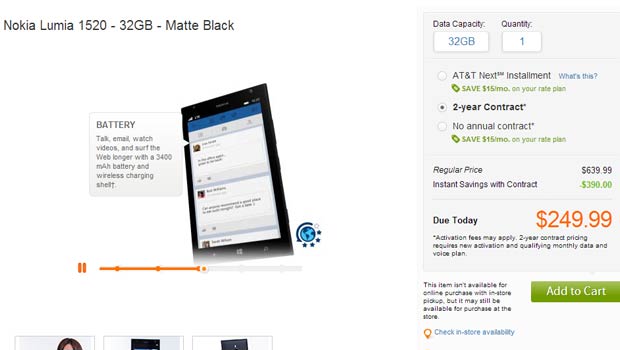 The Nokia Lumia 1520 is the first phablet from the Finnish giant and it’s the first in the Windows Phone ecosystem to feature a quad core Snapdragon 800 processor as well as a 1080p FHD display. The handset is 6 inches tall and it packs a 20MP PureView camera on the rear with Carl Zeiss optics.