Now, a Robot Baby Sitter to Entertain the Kids 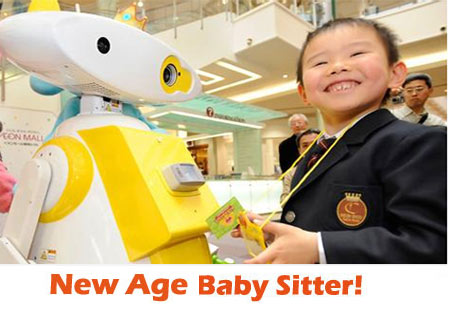 Parents who need a baby-sitter but cannot get one at the last minute will be happy to hear about a friendly robot that never gets tired of entertaining children.

Japanese company Aeon announced the introduction of a 140cm yellow and white robot at a store in Fukuoka. The company actually kept the robot in charge of entertaining kids while their parents took to shopping with no hassles. This robot was developed by robot maker Tmsuk and seemed to be a huge hit with children that day.

So how does a robot take care of children and is it safe to leave your children in the hands of a machine? Well, if parents wish to leave their kids with the baby-sitter robot, they have to pin a special encoded badge on their child. The robot can then identify the children by their names and ages and even talk with them!

The robot can also use a projector in one of its eyes to beam advertising messages or to show pictures that it captured with a camera that is located in its other eye.

Tmsuk and Aeon hope to further develop this technology to put such robots to other uses including acting as a guide to customers in store aisles, filling their shopping carts.

More importantly, they want to make sure that children in Japan get used to robots which in the near future are expected to become commonplace in day-to-day life. For instance, companies in Japan use robots as security guards, receptionists and as assistance in hospitals.