The original Notion Ink Adam tablet hit quite a bit of hurdles before and after its launch. Nevertheless, the Indian company is back for round two as the successor has already gone up for grabs in the country. The new release comes in two models, one with Wi-Fi connectivity and the other supporting 3G cellular networks.

Design-wise, the Adam II is an attractive tablet just like its predecessor. The company states that the design is ‘inspired from the art form of a book.’ The tablet like most others developed by Indian companies is being touted as an affordable release, delivering Android 4.2.2 Jelly Bean and various mid-range features on a budget. What’s worth mentioning is that the slate doesn’t support voice calling on the 3G model. 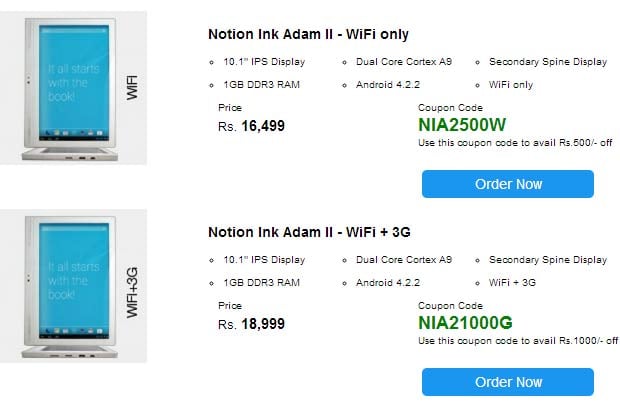 The hardware components and features of the Notion Ink Adam II are spot on with what were rumored before. The device offers a 10.1-inch IPS LCD screen with 1280 x 800p resolution and a secondary STN display for viewing notifications conveniently. There are dual cameras onboard, a 3.15MP front and rear snapper with 720p HD recording.

Additionally, the company has fitted with tablet with dual front-facing speakers. On the inside, a 1.5GHz dual core Cortex A9 processor does the hard work with quad core Mali 400 graphics and 1GB of DDR3 RAM. Buyers will also be treated to a 6000mAh Li-Polymer battery and various connectivity options such as Bluetooth 4.0 and Wi-Fi 802.11 b/g/n.