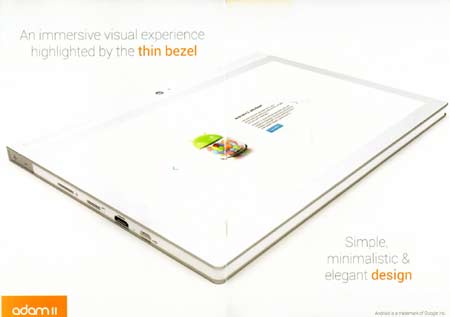 It has taken Notion Ink a little over a year to once again speak about the Adam II in India, bearing in mind that the Bangalore-based company had revealed certain technical details in January 2012, but spilled out no price then. This year however is different with the manufacturer subtly spewing most of the components at the National Technology Awards as well as letting out an expected retail value.

The reasonably priced Notion Ink Adam II has been sculpted to exhibit a screen estate stretching as much as 10.1 inches on its front panel, while its flip side bears an auxiliary monochrome monitor specifically meant to deliver quick notifications. Users should be able to enjoy viewing visuals at a resolution of 1,280 x 800 pixels from wider angles thanks to the IPS technology employed. 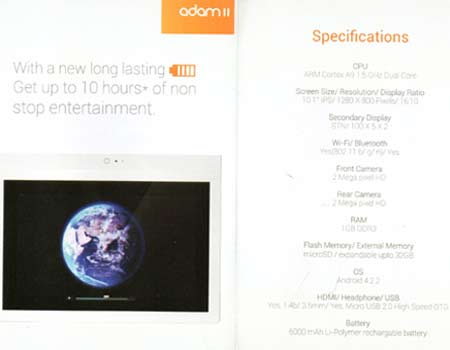 When its predecessor received the Ice Cream Sandwich update last year, we believed that the second generation slate too will soon be rolled out with the same OS. While ICS had been an ideal platform around that time, it’s soon becoming redundant with Jelly Bean overtaking most devices in the market currently. As a result of this, the company has packed the tablet in question with version 4.2.2 of Android.

A whopping 6,000mAh Li-polymer battery and a 1.5GHz dual core Cortex A9 processor which is assisted by 1GB of DDR3 RAM join forces to power up the gadget’s operations. Tagging along with the OMAP4470 CPU are PowerVR graphics. There are two cameras situated on the slab, each with a 2MP HD sensor and resting on either panel of the device. 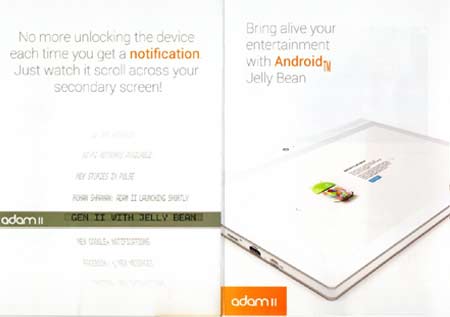 There still isn’t any information concerning the Notion Ink Adam II release date in India. But a post on Engadget has spoken of the OEM apparently rendering those who attended the press conference with a pamphlet which indicated that the device will start being sold later this year priced at Rs. 12,000. 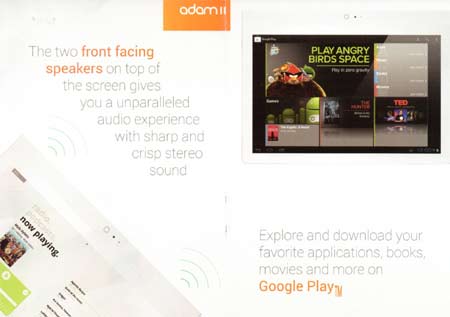 Here are the slate’s outlined specifications at a glance: