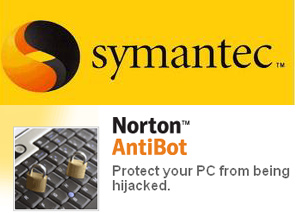 Security company Symantec has just released Norton AntiBot, a software that scans computers and their applications for the removal of bots and other malware.

The company has come out with this solution in an effort to combat the growing problem of the botnet pandemic which has taken the world by storm.

In fact, according to Symantec during the last six months of 2006, there were over 6 million active bots, which is an approximately 30% rise in zombie computers than observed in the previous six-month period.

In case you are wondering, bot refers to a piece of software which is able to install itself in systems and turn them into “zombies”. Once it becomes a zombie, a system can execute new commands that are issued remotely by the bot masters.

Now, if the bots are not properly removed, they can reinstall themselves, making them particularly difficult to destroy.

This is where Symantec’s Norton AntiBot comes into the picture, as the company claims that this software uses an active behavior-based heuristic detection system that is always on.

This technology analyzes the behavior of files and applications, ensuring that otherwise invisible malware is tracked and eradicated as soon as it exhibits harmful behavior.

According to Rowan Trollope, senior vice president, Consumer Products Division, Symantec, “Consumers need to know that they may be directly implicated in the criminal activities being perpetrated by botnets — if not by having their own identity or personal information stolen, then by being part of a network of zombie PCs carrying out large scale criminal activities like massive spam distribution and phishing email schemes.”

Symantec’s Norton AntiBot software is available immediately for a price of $29.99. This software includes a one-year subscription to Symantec’s protection updates.