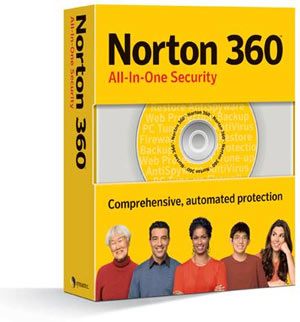 Yesterday, Symantec announced the availability of the newest addition to its award-winning line of Norton products. The new product called Norton 360 is a comprehensive solution that combines Symantec’s trustworthy technologies for antivirus, anti-spyware, firewall, intrusion protection, anti-phishing, backup and tune up. Norton 360, the all-in-one security service thus eliminates the need to purchase and manage multiple products as it protects computers and the information stored in them from Internet threats, frauds and data loss.

Norton 360 has been designed to work as automatically as possible, and even performs its duties in the background without interrupting the computing experience of users. The key design principals of Norton 360 are automation, functionality, user experience and performance.

According to Enrique Salem, group president, Consumer Business Unit, Symantec,“People today use their computers for much more than work or storing documents. If you ask most computer users what they rely on their PC for, they’ll tell you they use it to surf the web, bank online, shop, keep in touch with friends and family, listen to music and store their favorite photos. Norton 360 was created with these activities in mind. It not only protects against traditional online threats, but it also helps secure users’ identity when transacting online and safeguards valuable files like music and photos.”

Besides, Norton 360 users are also able to receive AntiSpam and Parental Controls through an optional add-on pack at no additional cost. Norton 360 can be installed on up to three PCs. Norton 360 along with other Norton security solutions such as Norton Internet Security, Norton AntiVirus and Norton Confidential have been designed to work with the newly launched Windows Vista operating system.