All good things come to an end and on that note, it looks like the Google Play Edition program has run its course. Over the months, we’ve seen devices drop from the Play store one by one, and now the last of the available pure Android releases, the HTC One M8 GPe, has also been discontinued.

This basically marks the end to all current Google Play Edition devices and we knew this day was coming ever since the Mountain View giant didn’t mount up a Galaxy S5 GPe version. Then there was the sudden disappearance of devices such as Sony’s Xperia Z Ultra, Samsung’s Galaxy S4 and LG’s Pad 8.3 which made the outcome more apparent. 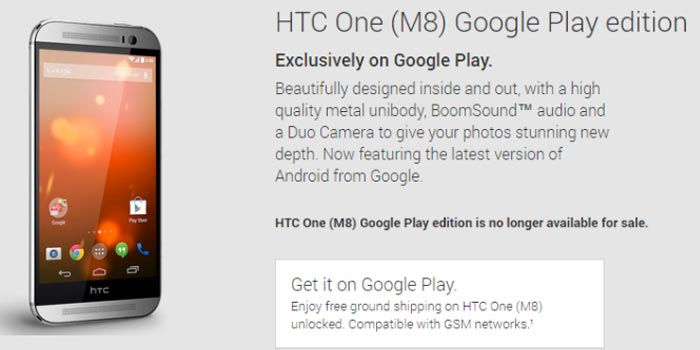 And as you probably know, there were no new smartphones or tablets launched under the Google Play Edition program to replace the fallen releases. 2015 was supposed to see the launch of Android Silver which would essentially be the replacement for GPe and Nexus lineups, but the search giant decided to kill the project before it even had a glimpse of existence.

The disappearance of the One M8 GPe from the Play store was spotted by Android Police. Visiting the Devices section of the store only shows the Nexus phones and no pure Android devices from other OEMs. However, the link to the HTC handset is still live and clearly states that the smartphone ‘is no longer available for sale.’

Google is yet to officially reveal whether it has discontinued the GPe program and there’s the possibility that it might release new devices under the series in the future. As for now, your only hope of getting a pure Android experience is by picking up a Nexus or Motorola’s Moto X or Moto G handsets.