Microsoft is soon to launch a selfie-focused smartphone of its own and it’ll most likely arrive as the Nokia Lumia 730. While there isn’t much concrete information on the device as yet, we’ve at least got a good look at its design thanks to recently leaked images.

Obviously, the Nokia Lumia 730 will be the successor to the popular 720 and the handset is said to sport a larger display along with improved cameras. WPCentral which is the source of the newly leaked images, notes that the device in question in currently being developed under the Superman codename. 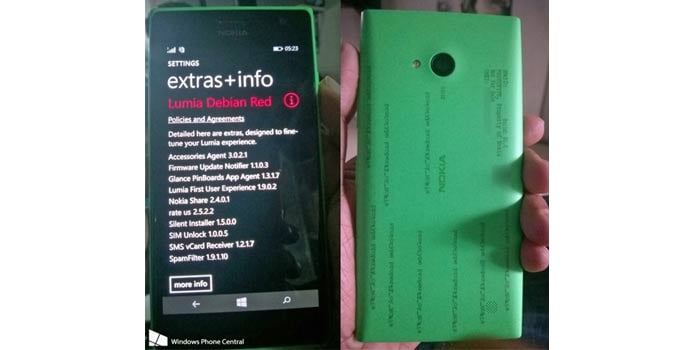 The handset’s design has nothing that we haven’t already seen before, but what’s worth pointing out is that the rear panel where the camera is housed has a slight bugle. This suggests that the sensor could be a large one and we might probably see it get the PureView treatment as well. What’s more, the UI highlights that the phone is running on the Lumia Debian Red update.

Nokia’s branding policy for updates goes in alphabetical order and follows the names of different colors. So, Debian Red could be the next Windows Phone 8.1 release with Cyan being the currently rolled out one. A previous report suggested that the Lumia 730 will sport a larger display of around 5 inches and it might even get HD visuals. Additionally, the selfie-focused camera could be of 5MP, whle the rear one might be an 8MP lens with Carl Zeiss optics.

Here’s a roundup of the leaked Nokia Lumia 730 specs:

The Nokia Lumia 730 is expected to make its debut by the end of this month and we could see the handset go on sale globally sometime mid-September.