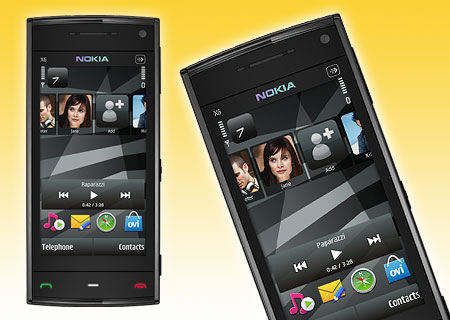 Well, sometime back a certain Finnish giant emerged with the striking Nokia X6, elevating the capabilities of the X series. Twisting and turning its attributes and capabilities, we have squeezed in this exclusive review of the phone. Nokia’s late entry into the touch-centric mobile world isn’t something new to ponder about. The company’s every effort to sculpt a touch-enabled phone that makes heads turn hasn’t shaped into reality. Using the word ‘effort’ frenetically reminds us of the 5233 with an attractive price tag seldom found with touchscreen handsets then. It was basically released to be distinguished from the rest and take the touch function to low-end handset segment of consumer markets. However, to bring in the touch effect, Nokia plainly decided to sacrifice all essential features. Nonetheless, precisely we are still waiting for Nokia to strengthen its roots in this particular market segment.

Undoubtedly, the X6 is one of the good looking phones to erupt out of Nokia. We received the phone in a huge box that also carried the bundled accessories and a user guide. The package includes battery (BL-5J), charger, connectivity cable, stereo headset, car holder and charger, user guide and a mini DVD. Well, this could probably explain why the X6 required such huge box. The unit that reached our desks adorned black attire but those who prefer angelic white to demonic black sprinkled with yellow or pink can opt for corresponding options as well.

Replicating a candy bar, this device happily snuggles in the palm. Synonymous to most of the handheld devices these days, the front part is glossy while the rear is matte, for the obvious reason of offering a better grip. The front portion is evidently dominant with the 3.2-inch display like almost all touchscreen phones these days. Just below the screen is a set of three buttons inked with call answer, call end and menu symbols. Above the screen, Nokia has flashed a section sporting the front facing camera lens, the proximity sensor and the display light sensor.

The top edge integrates the power button, charging and headphone jacks and the mini USB port, the right edge shows volume and camera buttons and a hold toggle switch while the left edge equips stereo speakers and SIM slot. The lower edge encompasses microphone and lanyard loop. Though an external SIM slot sounds fascinating, Nokia hasn’t simplified swapping SIMs. To change/take out the SIM, you have to take off the battery and slide out the SIM. The backflap rather the battery cover doesn’t seem sturdy and looks as if crafted of fragile plastic. In fact, the overall built-quality didn’t seem impressive as we clutched the phone.

This time around, Nokia has integrated a capacitive screen which delivers a pleasingly viewable experience with native resolution of 360 x 640 pixels and 16M colors. However, the effectiveness of the display fades away when used under sunlight. The quality is overall impressive, be it images, text or most of the other content.

The user interface is maintained simple with a single page menu, unlike some of the smartphones that come loaded with needlessly numerous icons extending to 2 or 3 pages. This Nokia handset runs on Symbian S60 5th Edition and has evidently made optimum use of it. Moreover, the kinetic scrolling feature deserves a mention. It has loaded the device with apps like Ovi Store and Ovi Music. Moreover, Nokia X6 users get a year of free music downloads. However, the tracks are DRM protected and can be used only on downloading the license. Besides, the Ovi Store lets one purchase several games, apps, wallpapers and more. We can’t compare it to the massive App Store but Nokia as crafted a decent one-stop-shop for its consumers. 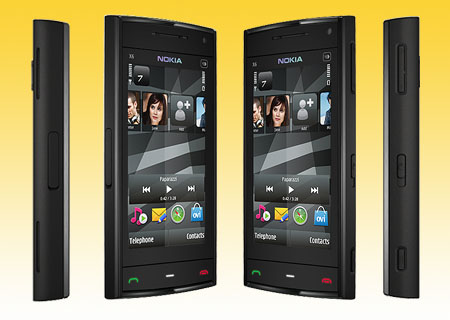 Nokia’s this device wouldn’t disappoint the ones with a fluttering music bug within them. Standing firmly by rhythmic functions, the included Playlist DJ helped generate playlists depending upon our mood. It gauges the mood by analyzing our preferences. We could easily download podcasts with the Podcasting app while Shazam is a music recognition service.

The Nokia X6 also holds onto to Ovi Maps which is Nokia’s navigation service with free turn-by-turn directions. As aforesaid, the menu is simple and maintains a 3 x 4 matrix as Games, Office, Camera, Clock and more have been dumped into the Applications icon. Nevertheless, the device’s claim as a Music phone helped it keep Office functions to minimum with File Manager, QuickOffice, Dictionary, Notes and Convertor.

Gaming has been spruced up with the Asphalt 4: Elite, DJ Mix Tour and Spore. The gaming experience could be delightful for users who occasionally get into gaming gloves to wile away time but those who dig into games too often could point out the below average graphics. The DJ Mix Tour has helped the device flaunt its touch ability to optimum. Molding into a touch device, Nokia has even outfitted a shortcut on a sensitive portion above the screen at the right corner.

The Nokia X6 exhibits an array of connectivity options such as 3G, HSDPA, Wi-Fi 802.11 b/g, Bluetooth v2.0 and A-GPS. File transfers using Bluetooth didn’t take much time. Evaluating its GPS abilities, the device was quick enough to track our way back home from office. The call quality was clear and maintained even amidst heavy traffic and honking horns. The loudspeaker has been put to use effectively.
The built-in browser is quick enough to load pages. But, that’s all about it as the overall interface was unimpressive. We had to tap multiple times for simpler tasks. Multi window browsing wasn’t convenient as well.

The Nokia X6 phone has taken navigation quite seriously as it bundles the Ovi Maps 3.0 and offers turn by turn voice navigation at no cost. The navigation functionality is further elevated with the inclusion of the holder Easy Mount HH-20 and CR-119 Charger in the package.

True to its name, the Nokia X6 does its job well as a music phone. It delivers good audio quality, be it using headphones or the loudspeaker. In addition, the 16GB of storage space comes handy to store numerous music files that come with a year of subscription to Nokia music service with this handset. The 3.5mm jack ensures private listening while Nokia packs in high-end headphones with integrated playback and volume controls. Coming back to the audio quality, listening to music with the headphones ensured clear sound even while on the go. The loudspeakers worked quite well. The music quality is appreciable even at the maximum volume wherein it usually starts distorting with some music phones.

Like most of the smartphones these days, this Nokia device embeds a 5MP camera with Carl Zeiss optics, autofocus and dual LED flash. It also comes with geo-tagging function. The image quality is considerably good. The images looked crisp and detailed. The video quality is decent as well.

The built-in 16GB storage space ensures storage of voluminous content. In addition, Nokia has bundled one year of free subscription at Ovi Music.

The X6 has been offered as a complete package of navigational functionality.

The camera with dual flash managed to take decent snapshots.

It bundles several quality features at an alluring price tag.

The UI didn’t seem that friendly.

The device does not seem sturdy and durable on holding.

Besides music, the device didn’t impress us as a multimedia device.

Undoubtedly, the Nokia X6 phone hops out of a stylish closet. However, a sleeker look would be appreciated. Users can binge on the numerous features that it holds within, but the highlight is the price that all this comes for. At Rs. 16,669, the handset could attract all those music lovers who are looking for something more than just music. Moreover, we feel Nokia has gone slightly overboard with the one year free access to Ovi Music and 16GB on-board memory. Of course it comes with several glitches, but those ready to ignore the bad for the good can clutch this handset right away. We shout out a rating of 8 on 10.