Nokia X5-01 Review: A music phone at its lurid best 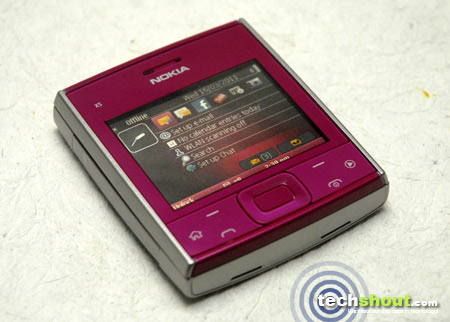 You have phones for music, phones for gaming, phones for business and then those that just want to look good. The Nokia X5-01 which we decided to review this week is a handset laying claim to being good for music, messaging and ogling at. While beauty may argue that it lies in the eyes of the beholder, we could at least take up the device on its other aspects. However, everyone’s aware about the shallow nature of human beings or we wouldn’t be able to forgive the iPad for not supporting Flash, the Æsir Yves Béhar offering for being a €42,000 feature phone and so on and so forth.

In spite of having been forewarned about its appearance from the pictures, panic overtakes us as we shake the X5-01 out of its box. Where’s the rest of our phone?! It’ll be some time until we get used to peering at the form which seems to suggest that someone applied a razor-sharp saw to it with great precision. We know, this is not the first of its kind to adopt the squarish shape. Take the Motorola Charm for example even if both devices don’t share the exact dimensions – it has the QWERTY keypad right on the face, lending a tinge of completeness to the look. The phone’s design comes across as disturbingly abrupt towards the base and until we get used to it, we’re going to hold it with the keypad slid open all the time. While not everyone may agree with us, topping the bizarre build with a fuchsia pink shade feels like that last straw made famous by the adage about the camel. It’s a good thing Nokia offers it in graphite black too. This glaring shade flows onto the silvery keyboard for marking the numbers as well as the shift button.

Pink and silver is the entire color theme sheathing the exterior and there’s a central navigation button as well as five other tactile buttons on the face. A microUSB port and an earphone jack balance themselves on the top frame and the volume rocker clings to its right side. The presence of a camera on the back panel is advertised by the lens printed with its 5.0MP sensor specification. The battery and SIM compartment are covered by a dark silver plate which can be opened by employing a sort of locking mechanism. Throw out those slim-fit jeans if that’s where you intend to stow this 74.3mm x 66.4mm x 16.8mm slider. The only other things we unearthed from the packaging covered the unavoidable user manual, charger, battery, microUSB cable for transferring content and a pair of in-ear earphones. Predictably, Nokia decided to keep it short with the said microUSB cable too, but this 129g device is no slender iPod shuffle which can hang from the port all by itself. 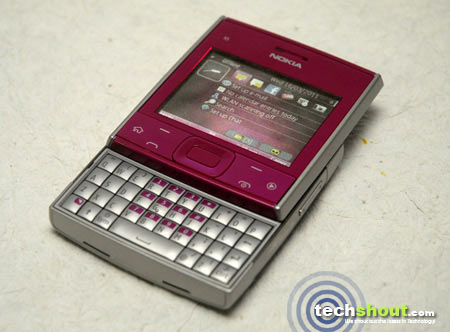 Unlocking and locking the Nokia X5-01 gets as simple as sliding the keypad closed and open, correspondingly. The phone uses the mourning Symbian 60 3rd edition mobile OS and the familiar on-screen interface. Starting with the input options, the softkeys need some strong fingers and more often than not, we find ourselves hitting the dedicated music button instead of the one for going back or selecting the required option. On the other hand, the QWERTY keypad’s non-glossy finish has just the right kind of roughness to enable us to use it without having the tips of our finger bounce and slip off the keys. What we’re sorely missing here is a trackpad for maneuvering around the web. It’s extremely annoying to sashay around pages smoothly without one and the keyboard shortcuts require some time before we fall for them. If there’s anything fresh and spectacular about the user experience in terms of the expected functions of a handset, it’s hiding from us very well.

We feel the sting of the short microUSB cable as we attempt to transfer stuff onto it from our desktop. If you’re stuck with an unusable front port or one which is more than quarter feet above the ground like us, here’s what to do – take off a shoe and hook up the phone to a port on the CPU’s rear panel. Then gently balance the X5-01 on a foot that’s floating cautiously in the air while transferring content and lamenting over the unavailability of a footstool. Insert a 32GB card into the memory slot and there’s plenty of space for fitting in most of your entertainment content, though the video playback option is limited to .3gpp and .mp4 files. The music player feature accommodates mp3, AAC, AAC+, eAAC and WMA files. The speakers are quite inexcusable for a music-centric phone. You’ll find yourself unable to distinguish between songs merely based on the opening tracks and even when the actual lyrics enter into the audio sphere, there’s no telling whether you’re listening to a remixed version of the song or the original. This is one phone that would have stayed a bathroom singer if it was a real person.

Nokia wants you to keep the music listening experience very personal, as evidenced by the good audio quality escaping the earphones though. The dedicated volume rockers and the extremely competent Shazam feature which comes pre-installed are just half the elements which make the music aspect a melodious one on this handset. A fun way of getting the count of unread messages is to lock the keypad and shake the device. But it takes some practice before you do it right and hear the exact number of thuds. If the Nokia X5-01 phone strikes you as a boring and predictable serving on every other front, personalizing it with apps from the Ovi Store is your best bet. Games like PacMan and DanceFabulous are a fun to play and the video watching activity could have done with a screen larger than the 2.3″ one. GPS and a front-facing camera are also missing on this phone. The 950mAh Li-ion battery lasts through almost 24 hours of average use or seven hours of heavy usage.

We like the sturdy QWERTY keypad which supports the input option in spite of the sorely missed trackpad features.

The audio quality escaping the earphones is something to harp on and the other supporting apps render it a musically-inclined handset.

The Nokia X5-01 has joined others like Microsoft Kin, Motorola Charm or Motorola Flipout in the square-shaped phone revolution that seems to have neither rhyme nor reason for having arisen. Its form factor tempts us to make up puns about tearing holes in our pockets.

The handset froze up on us four times during the course of our review.

The Rs. 10,499 price tag stitched to this phone covers taxes, although the official Nokia site says you can grab it for as low as Rs. 9,974. It offers nothing jaw dropping in terms of functionality and the kind of appeal exerted by the design is strictly a matter of individual perspective. The dedicated music softkey, Shazam feature, good sound quality through the earphones and volume rockers are all proof that the X5-01 is a great music-focused handset. We’re wrapping up this review of the Nokia X5-01 with an 8.8 out of 10 rating for it.