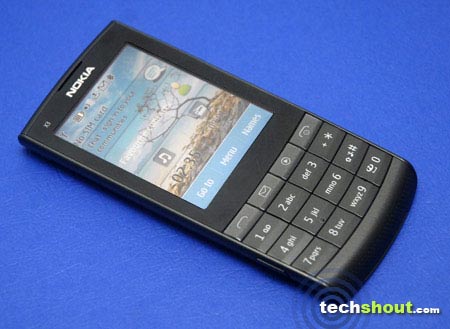 Ever enjoyed a ‘What’s missing in this image?’ game over a cup of coffee on a lazy weekend? If you’re wondering why we’ve recalled this comfortable picture of indolence, it’s because of what Nokia has been doing to our eyes lately. Take the X5-01 we reviewed not too long ago and you’ll know what we mean. It looked like the sawed-off half of a handset. We’re going to kick off this review of the Nokia X3-02 Touch and Type by explaining why the phone is sniggering away at our slightly confused initial glimpse.

And yet again, we know the tech specs should have warned us in advance, but unboxing a new gadget always puts everything else out of our minds. So it is a few seconds before we realize a central navigation button was not destined to be embedded onto the face of the device and hence the look of incompleteness. Nokia says we have to do with the rest of the buttons and the touchscreen for this phone. The appearance cannot be called nondescript by any means. The moment you lay eyes on it, you’re going to be wondering why it doesn’t air the familiar feeling of a feature phone. Overall, the exterior is slick and slippery. We say so because it’s easy for people with relatively large hands to simply not notice it sliding right out of a hand. 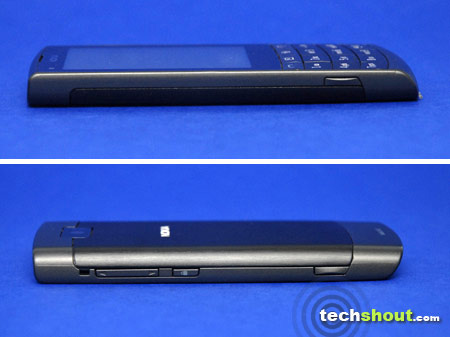 Out of the pink, white silver, petrol blue, lilac and dark metal options, we were handed a review unit of the Nokia X3-02 Touch and Type in the last mentioned paintjob. Along the sides are placed a microUSB connector, a 2mm charging port, a 3.5mm headphone jack, volume controls and a solitary button for summoning the locking mechanism. Lined along the display’s base are buttons for dialing/answering or canceling/ending calls, messaging and music. Out of the tastefully sloping base blares the speaker and opening the rear battery compartment is a cinch with the convenient latches on either side of the lower ending. The microSD slot can take up to 16GB cards, though the one we were given was of 2GB capacity.

This Series 40 6th edition Nokia X3-02 Touch and Type turns on to a rather plain interface with the regular Go to, Menu and Names options placed at the bottom of the UI. At the same time, you can satiate the clutter monster in you by customizing the homescreen with widgets, shortcuts and favorite contacts till each of one them is screaming about feeling claustrophobic. The 2.4” touchscreen on the front is of the resistive type and it plays out visuals in 240 x 320p QVGA resolutions. Some might see a gaping hole for an on-screen QWERTY keypad here. We see one too, but it’s cramped, and Nokia did well with not submitting to the temptation of adding a virtual keyboard. 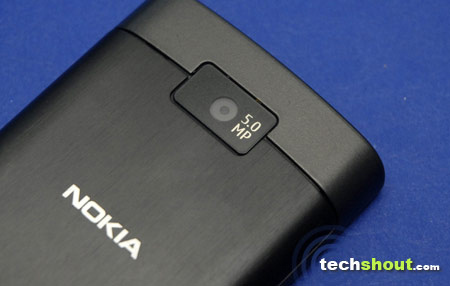 It takes time getting used to the lack of a directional keypad for navigating through the various functions, though the display does help the cause very obligingly, in spite of being resistive. It’s flush with long presses, kinetic scrolling and haptic feedback to a really useful extent. We don’t find ourselves starved for communication options as the phone comes with Nokia Messaging Services 3.0, IM via Ovi Chat, a unified MMS/SMS editor, Flash messaging and Nokia Xpress audio messaging. Apart from the regular serving of utilities like world clock, converter, Ovi Store, stopwatch, countdown timer and My Nokia, it also arrives pre-loaded with the Opera mini browser.

The supported technologies for summoning the powers of the web include Adobe FlashLite 3.0, Java MIDP 2.1 and video streaming. There’s the expected access to MySpace, YouTube, Facebook and other social networking services too. We’re treated to connectivity options like WLAN 802.11b/g/n, Bluetooth 2.1 + EDR, GPRS, EGPRS, HSDPA and HSUPA. The audio quality is first-rate for music as well as calls, while the speaker is an average performer in these departments. The music player accommodates WMA, mp3, AAC, eAAC and eAAC+ music codecs, metadata ID3 tags and album art. The playable video formats cover MPEG-4, 3GP: H.263 and H.264 codecs. Nokia’s also bundling download, streaming and progressive download among the other particulars. When it rubs down to surfing the web or watching videos, the screen resolution is nowhere near perfect for reeling out a properly satisfying experience. 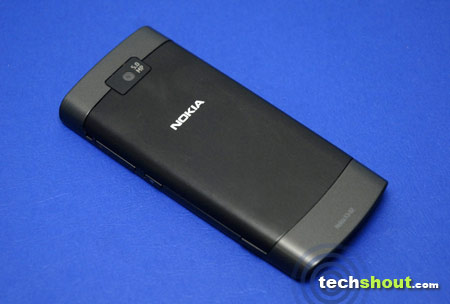 The camera peeking out of the back panel is a neat 5MP, which is pretty decent for a feature phone. It’s of the full focus type, forcing it to perform awkwardly during close ups. But it’s not bad at all for regular shots and balances color efficiently in spite of the missing flash and AF attributes. The QVGA video captures at 30fps and VGA recording at 15fps does leave room for wishful thinking though. As for how long you’d be able to survive in the wild without feeling desperate for the sight of a wall outlet, the 860mAh Li-ion battery keeps the X3-02 powered for four days of average usage. We guess extended battery life is one of those plus points about owning almost any other handset not falling under the smartphone category. 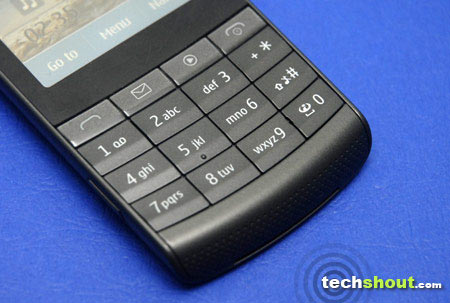 The 2.4” resistive touchscreen on the Nokia X3-02 Touch and Type is a pretty good one for responding to gestures.

The call quality is really great and we didn’t hit that annoying bump where our cheeks end up invoking the mute, loudspeaker or end call functions without meaning to, while dealing with touch displays.

Why is there no dedicated camera key on the phone? Or are we asking for too much on a mid-range device with a touchscreen?

This slab of a handset keeps slipping out of our hands owing to it being slim at 9.6mm, and sporting a 106.2mm height and 48.4mm width.

The Nokia X3-02 Touch and Type isn’t the best phone of its ilk that you can get for Rs. 8,839. We’re assuming the price has been fatted by the inclusion of the touchscreen, though it’s a little difficult to understand why anyone bent on a touch display wouldn’t just go for any other mid-tier smartphone, even if the tag reads a bit higher. There isn’t anything spectacular about the device, apart from the fact that it seems dissatisfied to be roosting in one clearly defined segment. We’re giving it an 8.7 out of 10 rating.