A few days back, we reported that Microsoft is working on a second generation of Android phones which is revealed to be the Nokia X2. And now, the very first image and hardware details of the series have been leaked online after making an appearance in a benchmark suit. Also, this revelation suggests that the Redmond company will continue to use the Finnish giant’s brand on future devices.

The Nokia X2 was spotted on AnTuTu benchmark by Chinese website Baidu that also managed to get its hands on a press render of the phone. A post on MyNokiaBlog highlights that the smartphone will come with the Qualcomm MSM8210 chipset which is a Snapdragon 200 processor. This SOC is, however, different from the one found on the current Nokia X phones which have two Cortex A5 cores clocked at 1GHz. 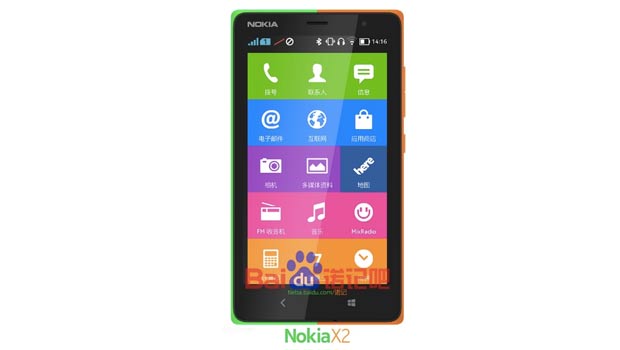 The Qualcomm MSM8210 is slightly faster being based on the Cortex A7 and it has a higher clock speed of 1.2GHz. Also, there’s a possibility that the chip will have a quad core configuration. The benchmark test also revealed that the Nokia X2 will have 1GB of RAM and 4GB flash storage. The upcoming series will continue to run on a forked version of Android and as reported before, there will be two capacitive touch buttons instead of just a back key. The new addition is the home button that’s not designed the traditional way as seen on most Android phones. Instead, it has the Windows logo engraved – We’re, for some reason, not surprised. 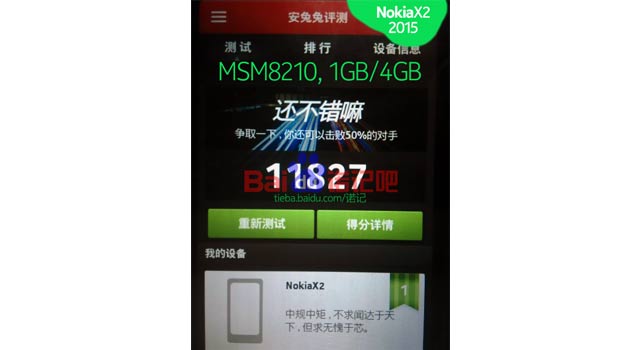 That’s about all the information on the Nokia X2 and we’ll be sure to update you with the latest leaks and rumors surrounding Microsoft’s upcoming Android phones.