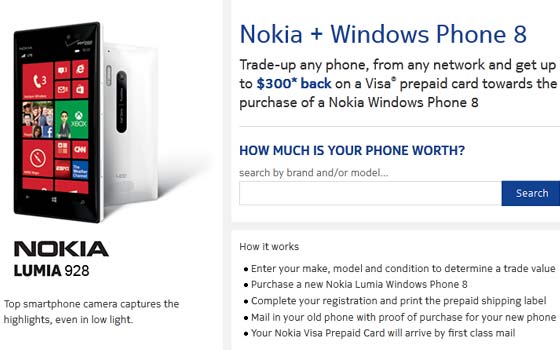 The Nokia Trade-Up program has gone live for those residing in the US allowing them to exchange their old smartphones for a good value on purchasing a brand new Lumia. Nokia is offering buyers up to $300 for their aged, but functional phones and it has partnered with Clover Wireless to carry out the promotion.

For those having fairly newer handsets like the HTC One and the Galaxy S3, the Nokia Trade-Up program doesn’t offer much in return. For instance, the former will only render $210, while the latter will fetch buyers $250. The iPhone 4S is also eligible for the promotion and owners can get up to $250 on it. These are just a few examples provided by the Conversations blog and an entire list of qualifying smartphones has been provided on the Nokia Trade-Up website.

The procedure is quite simple. Potential buyers will have to start off by entering in their handset’s make, model and condition on the aforementioned page as well as a promo code if available. Doing so will bring up an estimate which buyers are entitled to. The next step is to purchase a Lumia smartphone, which could be any one including the 920 and the 928.

Lastly, customers will have to register the details of their new phone along with a few personal details as well as send in their old handset accompanied by proof of purchase of the fresh one. Following this, the company will send a Visa prepaid card with the appropriate amount. What the Finnish manufacturer hasn’t specified is which smartphone(s) can get the maximum $300 on the Nokia Trade-Up program.

What’s worth mentioning is that all devices which are sent in get either refurbished for resale or Clover Wireless recycles them appropriately. Also, all content will be erased from the handset. There’s no specific time period provided for the Trade-Up program so we’re assuming it’s going to stick around for awhile.